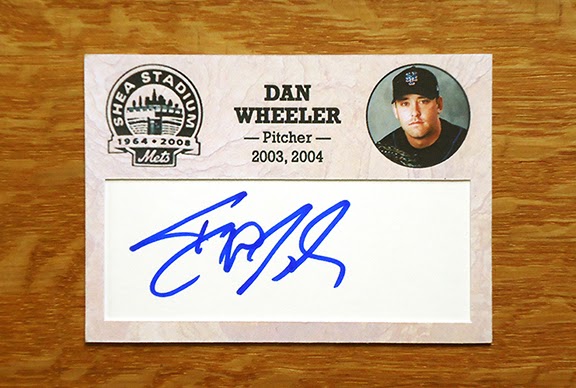 Dan Wheeler joined the New York Mets when he signed a free agent contract on January 27, 2003. The right-hander struggled in the early years of his major league career as a starting pitcher with the Tampa Bay Devil Rays. The Mets brought him into the organization with the plan to convert him into a full-time relief pitcher.

He would successfully begin that season with the Triple-A Norfolk Tides and be promoted to New York in June. It was on June 18, 2003 that Wheeler made his Mets debut at Dolphin Stadium facing the Marlins. Dan threw scoreless ball over the final three innings of the Mets 10-5 victory over Florida. He earned his first major league save. Wheeler would remain a part of the bullpen for the remainder of the season posting a 1-3 record, 35 strikeouts, two saves, and a 3.71 ERA over 51 innings of work.

Dan made the major league team out of spring training for the 2004 season. He was a favorite of Mets manager, Art Howe due to his ability to consistently throw strikes. Wheeler was 3-1 with a 4.80 ERA working out of the bullpen when New York attempted to demote him to Norfolk. The Mets needed his roster spot for starting pitcher, Jae Seo. Dan was traded to the Houston Astros in exchange for minor league outfielder, Adam Seuss on August 27, 2004. "I was very surprised," said Wheeler. "I understand that they had to make a move, but a trade was the last thing I thought of. I talked to Jim Duquette and he said they put a claim in on me, so they had to make a move to keep me in the big leagues. So they did this out of respect to me."

Following 13 seasons in the major leagues, Wheeler retired from baseball in 2014.

Dan Wheeler signed his card in the set for my friend Lou at the Major League Baseball offices in New York City before Draft Day on June 5, 2014.
Posted by LEE HARMON at 6:34 PM No comments: