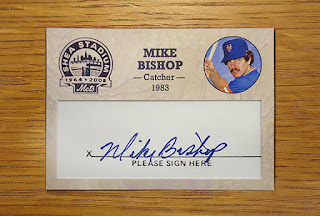 Mike Bishop joined the New York Mets organization when he signed as a free agent on January 10, 1983. The Santa Maria native was selected by the California Angels in the 12th round of the 1976 amateur draft and remained with that club's minor league system until 1982.

The Mets starting catcher, John Stearns suffered a strained right elbow and was placed on the disabled list early in the 1983 season. Stearns was activated on April 12th feeling that he was ready to return to action. During practice it was determined that was not the case and John returned to the disabled list three days later. "But the weather was so cold," Mets general manager Frank Cashen explained, "that he found he couldn't turn the ball loose. There's no new injury. We just feel he's not ready yet. And I can't take a chance going with only one catcher."

Preferred minor league reserve catcher Ronn Reynolds had been promoted to New York as Stearns initial replacement. League rules prohibit any player returned to the minor leagues from being recalled a second time within a 10-day period. So the Mets instead purchased the contract of Mike Bishop from Triple-A Tidewater to fill the vacant roster spot on April 15th.

The 24-year-old rookie would make his major league debut as a part of the Mets the very next day, April 16, 1983. Bishop was the starting catcher facing the first place Cardinals in St. Louis. Mike would go 0-3 at the plate with New York losing it's sixth straight game of the young season 6-2.

Bishop's next appearance came catching Mike Torrez at Shea Stadium on April 20th against the Pittsburgh Pirates. Bishop delivered a double to left field in the second inning for his first major league hit. He would score a run and later draw two walks in the 7-5 Mets victory.

Mike made his final major league appearance when the Mets defeated the Braves 5-3 in Atlanta on April 24th. He was sent back to the Tidewater Tides along with shortstop Ron Gardenhire when the Mets chose to promote Tucker Ashford and the celebrated prospect Darryl Strawberry from Triple-A on May 5th.

Michael Bishop died of a heart attack in Bakersfield, California on February 8, 2005 at the young age of 46.

I created Mike Bishop's card in the set from an autographed index card from "The Sports Collection of Joe Gerson" that was obtained from Dave Berman on February 16, 2015.
Posted by LEE HARMON at 1:09 AM 1 comment: 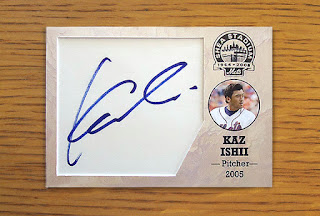 Kazuisha Ishii came to the New York Mets when he was traded from the Los Angeles Dodgers in exchange for Jason Phillips on March 20, 2005. The left handed pitcher from Chiba, Japan was brought in to serve as the fifth starter in the rotation. "If he's your fifth starter, geez," Met pitching coach Rick Peterson said the day after the trade. "That's not a fifth starter, by any means." Kaz had shown lapses of control with the Dodgers. "He loses his mechanics sometimes and can't throw the ball where he wants to. He'll get spells of that," Los Angeles pitching coach Jim Colborn explained. "His style, one needs a lot of patience to allow him to win his games because the  way he does it can be nerve-wracking - that's the best word."

Kaz made his Mets debut starting the third game of the 2005 season at Great American Ball Park in Cincinnati. He would pitch 6-2/3 innings and allow six runs during the 6-1 loss to the Reds on April 7th. Ishii's next start would come at Shea Stadium opposing Roger Clemens and the Houston Astros on April 13th. Kaz pitched masterfully holding the visitors scoreless during his seven innings of work allowing only two hits. Clemens matched his performance and the game was decided by the bullpens in the eventual 1-0 Mets victory.

Ishii got his first Mets victory on April 28th in Florida. Kaz took a shutout into the seventh inning and drove in the first run with a base hit off Marlins pitcher Dontrelle Willis in the 6-1 win. Ishii kept the game ball and said he planned to turn it over to his wife Ayako Kisa (a japanese television host) as a present after forgetting her birthday a few days earlier.

The lefty would continue to pitch inconsistently over the remainder of the 2005 season. He was optioned to Triple-A Norfolk on August 7th, and only returned when rosters expanded at the start of the next month. He finished with a 3-9 record and 5.14 ERA in 19 games for New York. His first 16 appearances were all starts, but the final three came from the bullpen in September. The Mets granted him his release on December 19, 2005.

Kaz returned to pitch in Japan for the Central League's Yakult Swallows in 2006. He joined the Saitama Seibu Lions in 2008, and announced his retirement from baseball on September 24, 2013.

I made Kaz Ishii's card in the set from an autographed index card signed for a collector at Shea Stadium during the 2005 season.
Posted by LEE HARMON at 11:43 AM No comments: