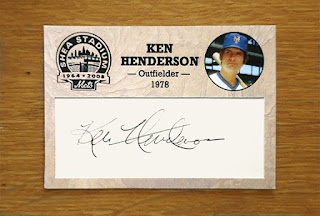 Ken Henderson joined the New York Mets when he was traded along with Willie Montanez and Tom Grieve from the Texas Rangers in exchange for Jon Matlack and John Milner on December 8, 1977. A trade during the Baseball Winter Meetings held in Hawaii that year. The entire transaction began with a chance encounter between Mets manager Joe Torre and Rangers owner Brad Corbett over the availability of Milner. The deal was actually part of a larger one also involving the Atlanta Braves and Pittsburgh Pirates that totaled 11 players. John Milner would end up moving to the Pirates that day.

Ken made his New York Mets debut on April 7, 1978 on Opening Day at Shea Stadium. The team would defeat the Montreal Expos 3-1 behind Jerry Koosman's complete game effort. The offense came from back to back doubles from the former Rangers, Montanez and Henderson as New York scored twice in the second inning of the game.

Following a Mets 6-0 victory over the Chicago Cubs the club was 4-1 to begin the year and sitting atop the National League East. Despite the great start only 3,751 fans at Shea were there to witness Ken Henderson's first home run as a Met. A solo shot off of Paul Reuschel in the 8th inning. "I'm encouraged with the way we are playing," Ken said following the game. "When I was traded here. I wanted to play every day. Otherwise I'd just as soon have stayed in Texas as the fourth outfielder for a contender. But from what I've seem this is not a second division team like everyone says."

On April 12th, during the seventh game of the young season a single play changed the season for the Mets new outfielder. "I was there such a short time, however a catch I made on a Dave Kingman drive to the wall in right field stands out to me." Henderson remembers years later. "Unfortunately, I hit my left foot and injured my toe when I hit the wall. I had to wear a cast the rest of the year to play." Ken was removed from the game and the Mets lost 4-2 to the Cubs.

A few days later Henderson was placed on the disabled list where he remained until May 19th. Once he was activated the Mets traded Ken to the Cincinnati Reds in exchange for pitcher Dale Murray. Ken was asked in 2015, if it was tough for him to deal with the bad luck that limited his playing time while with the Mets. "Absolutely," Henderson responded. "I played the game hard, and I took chances, but it was the only way I could play."

Henderson ended his 16-year major league career in 1980. He returned to the San Francisco Giants organization in March 2010 as a member of their marketing department. Ken was given a World Series ring when the team won the fall classic that year. "I could not get my World Series ring as a player, which is my biggest disappointment." Henderson said in 2011. "But I now have one I can put alongside my dad's." Ken's father had been a scout for several major league teams and earned his ring in 1984 with the Detroit Tigers.

Ken Henderson signed his card in the set from an autograph request sent to his home on January 29, 2009.
Posted by LEE HARMON at 5:41 PM No comments: