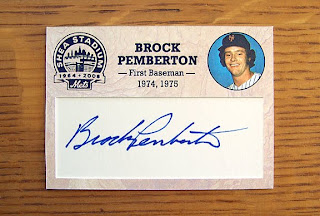 Brock Pemberton joined the New York Mets when he was selected in the sixth round of the 1972 amateur draft. The high school star from Tulsa, Oklahoma was part of a baseball family. His father, Cliff Pemberton had played in the Brooklyn Dodgers minor league system during the 1940s. After he was drafted Brock sat down with his parents and discussed his options. "It was the matter that I had scholarships to go to the universities, good ones, and what was I going to do?" Brock explained. "I think it was a lifelong dream to play major league baseball. I had been tutored to play the game, and this is what I wanted to do."

Pemberton was a key member of the Victoria Toros club that had just won the Texas League Double-A Championship in three straight games over the El Paso Diablos. It was there that team manager, Joe Frazier would give him the news. "He told me that I was going to the big leagues with Nino Espinosa." Brock said, "I was like, 'Whoa. Hold on here we go!'" A phone call to his parents was followed by a drive to collect his things in Victoria. Then back home to Tulsa for some impromptu clothes shopping. "You are supposed to wear suits and ties on the airplane I found out." He then boarded a flight to LaGuardia that brought him to New York City for the first time in his young life.

The next morning his new team roommate, Bruce Boisclair brought him to Shea Stadium. "We went out at three o'-clock. Got there early, early." Pemberton remembers being awestruck even before the game crowd arrived, "I used to go to San Diego when I was in high school...but Shea Stadium was amazing. It was beautiful." Brock made his major league debut on September 10, 1974 facing the Montreal Expos at Shea. He was called in to pinch-hit in the ninth inning with the bases loaded. "I mean I didn't have anything. I borrowed a bat from Bud Harrelson." Brock said, "The first pitch was way below my knees, and the umpire (Frank Pulli) looked at me and said, 'Hey rookie. Welcome to the National League.' I struck out."

His favorite memory of a brief major league career came the next day. On September 11th a marathon contest between the Mets and the St. Louis Cardinals occurred. Brock recalled, "We were winning. I sat there, and I sat there. They tied the game up in the ninth. Kenny Reitz hit a home run, and tied the game. I sat there, and I sat there, and I kept looking around. There was nobody left on the bench except me. Yogi goes, 'Go in and hit.' It was the bottom of the 25th with two outs. I got a base hit off of Sonny Seibert that almost took his head off with it. From what I understand I was the youngest rookie to get a base hit after three-o’clock in the morning." New York would lose in the 25th inning at 3:13 AM, in what was technically the next day. This was the longest game in history played to a decision without a suspension. It was also the game that yielded Brock Pemberton's first major league hit.

A baseball strike would hinder the start of spring training the next year. When play resumed Brock found himself back in minor league camp almost immediately. He was told that at 20 years of age he was "just too young". Pemberton was given a second September call-up in 1975. This time he would only manage two game appearances, and was traded with Leon Brown to the St. Louis Cardinals in exchange for Ed Kurpiel on December 9, 1976.

After his active playing career, Brock became the player/manager for the Macon Peaches of the South Atlantic League in 1980. Then he left baseball and joined a national landscaping company based in Tucson, Arizona as a construction foreman.

Brock Pemberton signed his card in the set from an autograph request sent to his home on January 28, 2010.
Posted by LEE HARMON at 9:03 PM