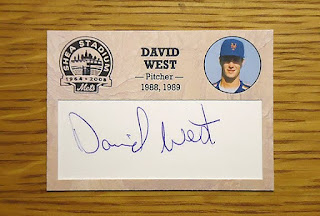 David West was selected by the New York Mets organization in the fourth round of the free agent draft on June 6, 1983. The left-hander came to professional baseball straight from Craigmont High School in Memphis, Tennessee.

West established himself as a high level prospect with fine work in the minor leagues. Unfortunately for the southpaw there was an abundance of quality pitchers in New York. His 12-4 record with the Triple-A Tidewater Tides earned him the starting assignment at the 1988 International League All-Star Game and a late season call-up to the Mets. David made his long anticipated big league debut on September 24th in St. Louis. He threw five innings to earn the victory in New York's 14-1 win over the Cardinals. The performance was followed with an inning of relief work in Philadelphia four days later. He finished his first taste of the major leagues with two appearances, a 1-0 record and 3.00 ERA.

David was invited to major-league training camp the next spring with hopes of joining a talented starting rotation. He pitched well, but was assigned to Triple-A due to the depth in New York. "How can I go back to Tidewater and improve on a 1.80 earned run average?" West asked. "I came here expecting to make the team. I knew the Mets already had six good starters but I felt if David West pitched well, something would happen. I'm disappointed. I'm angry. I'm also not in a position to go in and demand anything. The ball's in their court. I have no leverage."

The young hurler was brought back to New York on June 11, 1989 with the trade of Terry Leach to Kansas City. This time he was assigned to work from the bullpen, and allowed him to make his first game appearance at Shea Stadium on June 15th. Although a starter his whole career, West thrived in his new relief role. The Mets ace pitcher, Dwight Gooden was removed from the rotation with an arm injury in July. David was given the opportunity to replace him. The rookie took the mound at Shea on July 6th, and allowed seven runs in just four innings of work facing the Cincinnati Reds. His second start yielded harsher results with eight runs in less than three innings against the Houston Astros.

David was returned to the bullpen. Just minutes before the midnight trading deadline, the Mets traded the formerly untouchable West, along with Rick Aguilera, Kevin Tapani, Tim Drummond, and Jack Savage to Minnesota on July 31, 1989. New York received pitcher Frank Viola from the Twins. "I know we're giving up a lot for Viola, he's one of the premier pitchers in baseball," Mets manager Davey Johnson said. "Any time we can get a player of this caliber, you have to make the trade."

After a 10-year major league career, that included a World Series with both the Twins and Philadelphia Phillies, the left-hander retired from pitching in 1999. He remained near the game by first serving as a high school pitching coach in Florida. Then later joined the staff at Memphis Baseball Academy in October 2011.

David West signed his card in the set for J&M Sport Cards at an autograph event held at 263 Marketplace in Warminster, Pennsylvania on April 7, 2012.
Posted by LEE HARMON at 5:40 PM