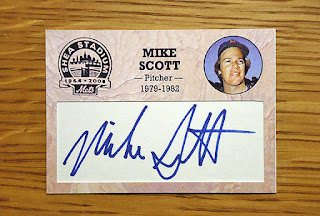 Mike Scott was selected by the New York Mets organization in the second round of the free agent draft on June 8, 1976. The right-hander from Pepperdine University pitched very well for the Double-A Jackson Mets, but not as strong at the Triple-A level in 1978.

Scott earned a spot on the Mets staff with a good spring training the next year. He made his major-league debut with New York on April 18, 1979. Mike threw two innings in relief of Pat Zachary during the Mets 6-5 loss to the Expos in Montreal. His next appearance was as the starting pitcher at Shea Stadium on April 24th. Scott threw five innings and was credited with the victory in the 10-3 win over the San Francisco Giants.

Mike led the club's pitching staff with a 3.90 ERA in 1981. His 13 losses, and 100 runs allowed were the team highs the following season. The Mets traded Scott to the Houston Astros in exchange for Danny Heep on December 10, 1982. "Inconsistency has been Mike's tag," explained Mets broadcaster, Tim McCarver at the time of the trade. "But he could be a good pitcher someday."

"I was just trying to hang on." remembered Scott. "I think that you go through different phases when you get to the big leagues. The first phase is just to hang on. You try to stay on the team and see if you belong there or not. The next phase is to produce and do something, be one of the guys who contribute. After that you want to win a World Series."

The hurler added a new weapon by learning the split-fingered fastball from legendary coach, Roger Craig after joining the Astros.

All seemed to come together for Mike Scott in Houston during 1986. He would throw a no-hitter on September 25th at the Astrodome to clinch the National League Western Division title. The victory earned the right to face the Eastern Division winning Mets in the Championship Series. Scott dominated New York in his two starts, but saw his Astros fall to the eventual World Champions 4 games to 2. Although a member of the losing team, he was named the Most Valuable Player of the 1986 NLCS. It was the first time in baseball history that this had ever occurred.

Mike's performance was clouded by accusations that he illegally scuffed the baseballs he threw. The controversy was revisited during MLB Network's program "1986: A Postseason to Remember". "We knew this during the season," Keith Hernandez revealed during his interview. "because when you're the home team, every foul ball that goes up to the screen and gets rolled back down, the batboy collects it. It doesn't go to the visitor's side, It goes to the home team side, so we knew." Mike Scott returned with, "They can believe whatever they want to believe. Every ball hits the ground has something on it...I've thrown balls that were scuffed but I haven't scuffed every ball that I've thrown."

Scott left baseball after the 1991 season. Facing a surgery with a long rehabilitation he chose to leave with a career record of 124-108. The Houston Astros honored their right-handed star by retiring his jersey number 33 in 1992.  "I would have traded me too." Mike offered in 2003. "I have no animosity to the Mets. They got me to the big leagues." Scott has enjoyed time with family, and playing golf in his retirement. "My wife and I talked about traveling. We haven't really gone to Europe. I'm going to keep doing what I'm doing now. I'm enjoying it."

Mike Scott signed his card in the set during a private signing in Houston on January 6, 2012.
Posted by LEE HARMON at 8:28 AM