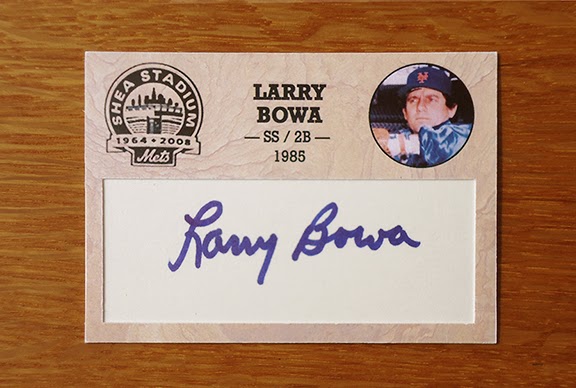 Larry Bowa came to the New York Mets when he was signed as a free agent on August 20, 1985. The 16-year veteran had been released from the Chicago Cubs eight days earlier. Bowa came to a first place New York team that found themselves unexpectedly in need of a reserve shortstop. Rafael Santana had been backed up by Ron Gardenhire that season, but a groin strain forced him to the disabled list. "When Gardy went down I got on the phone and said: 'Get me Bowa'. He's an ideal player of experience for a pennant race." Mets manager, Davey Johnson told the New York Times.

"I didn't expect to get any calls, what with the age factor, and most of the clubs are pretty solid at shortstop," the 39-year old Bowa told the Chicago Tribune. "The only thing that made it easier was the chance to play with a contender." Larry would make his Mets debut at Shea Stadium on August 23rd. Bowa was the starting shortstop for the 3-0 loss to the San Diego Padres.

The switch-hitting infielder would appear in a total of 14 games for New York and record two hits in 19 plate appearances for a .105 batting average. The Mets would finish the season with 25 wins against 17 losses, but their 98 wins placed them three games behind the St. Louis Cardinals for second place in the N.L. Eastern Division. Larry was granted free agency at the end of the season.

After his retirement following the 1985 season, Bowa went into coaching, serving as the manager of the San Diego Padres for two years. He also served as a coach with the Phillies, Anaheim Angels, and Seattle Mariners before returning to Philadelphia for a four-year stint as the manager of the Phillies. He was named the National League Manager of the Year in 2001 after guiding the Phillies to within two games of the division title after a last-place finish the year before. He followed that by serving as a third base coach for Joe Torre with both the New York Yankees and Los Angeles Dodgers.

Larry Bowa signed his card in the set from an autograph request sent to his home on January 22, 2009.
Posted by LEE HARMON at 11:13 AM