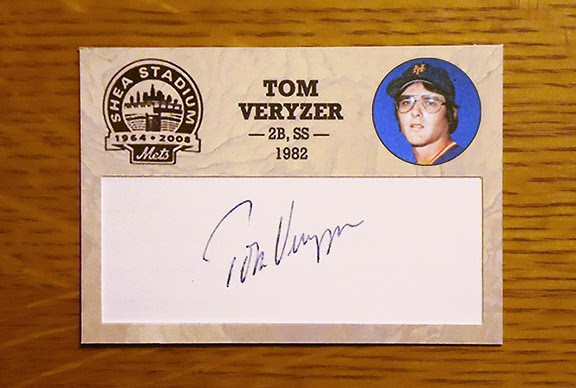 Tom Veryzer was traded to the New York Mets from the Cleveland Indians in exchange for Ray Searage on January 8, 1982. "With the trade of Frank Taveras, we were looking for an experienced infielder to team with our youngsters like Ron Gardenhire and Wally Backman," Mets general manager, Frank Cashen told the New York Times. "Tom Veryzer provides us that infielder."

The 29-year-old Long Island native was glad to join the Mets. "I'm thrilled about the trade," Veryzer said from his Islip home. "Nothing could be better than going home to play. I was a regular for four years in Cleveland and I know there is a chance to play here too."

Veryzer made his Mets debut on April 9, 1982 facing the Chicago Cubs at Wrigley Field. He entered as a replacement for the starting shortstop Gardenhire. Tom was used primarily as the backup to the younger infielder until an injury essentially ended his season. Veryzer fractured his leg when Atlanta Braves outfielder, Claudell Washington slid into him at second base on June 1st. Tom was unable to return to play until September. "I've played long enough to know you accept these things," Veryzer reflected later. "You can't change what has happened. A lot of things could be worse." He appeared in a total of 40 games with 54 plate appearances and a .333 batting average.

Veryzer returned to battle for one of the starting middle infielder jobs the next spring. Although the veteran really considered himself a shortstop. "Everybody says that if you can play shortstop you can play second base," Tom explained. "My problem is that while I'm at shortstop I don't have to think. But at second, a little thing like a ground ball to third, I'm supposed to run to first. But half the time, I just stand there." The club valued his bat but decided to remain with their two younger options. They traded Veryzer to the Chicago Cubs in exchange for minor leaguers, Rob Schilling and Craig Weissmann on April 2, 1983.

Tom continued his major league career two more seasons before retiring from the game following the 1984 campaign. He was inducted into the Suffolk County Hall of Fame in 1995.

Veryzer suffered a stroke and passed away at the young age of 61 on Tuesday July 8, 2014.

Tom signed his card in the set from an autograph request sent to his home on January 28, 2009.
Posted by LEE HARMON at 12:55 PM