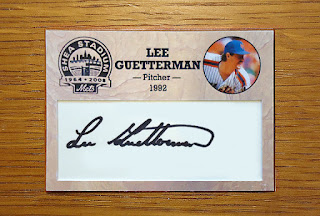 Lee Guetterman was traded from the New York Yankees to the New York Mets in exchange for Tim Burke on June 9, 1992. The deal was hoped to allow a fresh start for two relief pitchers in need of one. "There is a lot of sadness, but under the circumstance there is hope," Guetterman offered to the New York Times after the trade. "I felt like I was in a rut. There is no one to blame. My slide didn't start this season. It has been building."

The left-hander made his debut with the Mets the next day, June 10th at Montreal's Olympic Stadium. Lee entered the game to pitch a scoreless ninth inning during the 8-2 loss to the Expos. He would first pitch at Shea Stadium on June 12th facing the Pittsburgh Pirates. Summoned again to start the ninth inning, he would record the first two outs but then surrender two hits. Jeff Innis relieved and induced a ground out to end the 3-2 loss without either of those runners scoring.

Guetterman had an very effective month of July for the Mets. He allowed just three earned runs during his 13 appearances spanning 15-2/3 innings of work. During that time he earned two wins and recorded his first save as a Met. The final game of July was at Veteran's Stadium and was much less successful for the southpaw. Summoned to finish the eight inning of a 2-2 tie, Lee allowed a pair of hits to load the bases. The next batter, Dave Hollins of the Phillies ended his day with a grand slam that proved to be the game-winning hit of the 6-3 Philadelphia victory. "With a 3-1 count and the bases loaded, you go right after him," Guetterman said afterwards. "Obviously, I didn't have what it takes today."

Guetterman retired from baseball following the 1996 season. Lee was named to the Liberty University Athletics Hall of Fame in 2010. Since his professional pitching career ended, he has been serving as an instructor in the Tennessee area through Lee Guetterman Sports.

Lee Guetterman signed his card in the set from an autograph request sent to his home on January 24, 2009.
Posted by LEE HARMON at 5:11 PM