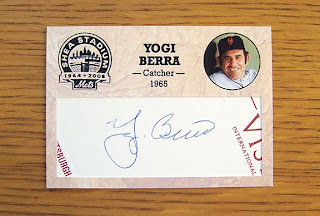 The legendary Yogi Berra first came to the New York Mets when he was signed as a free agent on April 27, 1965. The catcher had been a non-playing manager for the New York Yankees during the prior season. He was fired when his club lost the 1964 World Series to the St. Louis Cardinals in seven games. Yogi's return to the diamond with the Mets would only last four games (three of which occurred at Shea Stadium) and only two had him defensively behind the plate. Berra's finale as an active player came on May 9th facing the Atlanta Braves in the first game of a Sunday afternoon doubleheader in New York. Although known as a very selective hitter throughout his career, he would strike out three times that afternoon. The end was obvious, and Yogi was granted his release as a player on May 19, 1965.

Yogi would continue his coaching duties with the Mets from 1965-1971. Assisting the great Gil Hodges during the 1969 Miracle Mets World Championship. It was Hodges' untimely death that gave Berra the chance to return as a major league manager. He became the Mets' skipper at the start of the 1972 campaign. Leading the team to the National League Championship by defeating "The Big Red Machine" in an improbable upset of Cincinnati in 1973. During which he added to his classic quotes, "It ain't over, till it's over!" The colorful Berra would remain the manager of the Mets through the 1975 season.

Yogi Berra was elected to the Baseball Hall of Fame in 1972. "You never think of that when you're a kid," Berra said of his induction. "But egads, you gotta be somethin' to get in."

Yogi Berra died of natural causes in Montclair, New Jersey on September 22, 2015 at the age of 90. He was preceded by his beloved wife of 65 years, Carmen who passed away in 2014.

I created Yogi Berra's card in the set from an autographed notepad sheet. It was signed for a staff member at the Vista International Hotel in Pittsburgh, Pennsylvania when Yogi was a guest there.
Posted by LEE HARMON at 9:35 AM