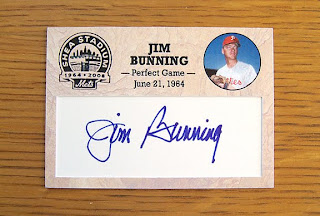 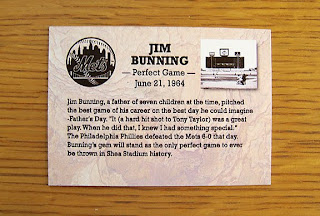 The great pitchers in New York Mets history were unable to throw a no-hitter during the Shea Stadium era. However, an opposing pitcher did manage the feat and it was no less than a perfect game. Jim Bunning, a father of seven children at the time, pitched the best game of his career on the best day he could imagine—Father's Day.
On June 21, 1964, the Philadelphia Phillies visited a brand new Shea Stadium. Bunning took the mound and only needed 90 pitches (throwing 79 for strikes) to record the 27 consecutive outs to register his perfection. Along the way the right-hander struck out 10 Mets' batters and needed a fine defensive play from his infield. "It (a hard hit shot to Tony Taylor) was a great play." Bunning said, "When he did that, I knew I had something special." Jim was reported to have tempted fate during the ninth inning when he called catcher Gus Triandos to the mound. He requested that Gus tell him a joke so he might catch his breath. Triandos could not think of one and laughingly said, "Just get this guy." Actually Bunning broke every superstition during the game. He counted down outs to his teammates throughout, saying "Nine more to go... Six more... three more."
Jim Bunning signed this card from the set through his Senate office in northern Kentucky for my friend, Kevin on August 22, 2009. After his baseball career Mr. Bunning became a politician in 1977 and was first elected to the United States Senate, representing Kentucky in 1998. He was elected by the Veterans Committee to the Baseball Hall of Fame in 1996.
Posted by LEE HARMON at 9:45 AM