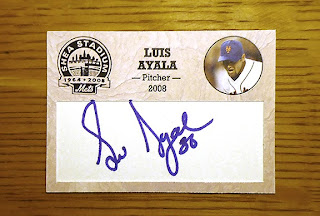 Luis Ayala was traded from the Washington Nationals to the New York Mets in exchange for Anderson Hernandez on August 17, 2008. The Mets lost their closer, Billy Wagner to an elbow injury just days before. So when the Nationals placed Ayala on waivers New York claimed him. The two clubs were able to later work out the deal. "I'm surprised. It's a little bit late for a trade, but for me, I passed my best times in this organization." Luis said in Washington following the announcement. "They're fighting for first place, so I'm going to try and clear my mind and try to help the bullpen."

The right-hander made his Mets debut on August 19th. Pitching the last two outs of the seventh-inning at Shea Stadium during a 7-3 victory over the Atlanta Braves. On September 8th Ayala had picked up his sixth save in seven chances in a 6-3 win over the Philadelphia Phillies. When it was determined that Wagner needed season ending surgery the Mets established Luis as the new closer. "I feel bad for Billy, but I'm here for whatever the team needs," explained Ayala. "and, I know I can do the job."

New York would fade down the stretch and lose their chance at the National League Wild Card entry on the last day of the season. Ayala was one of the Mets pitchers to take the mound during the final game ever played at Shea Stadium. He surrendered the final run scored by the Florida Marlins in their 4-2 victory on September 28th.

Luis finished with a 1-2 record, nine saves, and a 5.50 ERA in his 19 appearances for New York. He left the Mets when he signed a free agent contract with the Minnesota Twins on February 19, 2009.

Luis Ayala signed his card in the set for my friend, Sam before the Atlanta Braves played the Philadelphia Phillies at Citizen's Bank Park on July 6, 2013.
Posted by LEE HARMON at 10:45 PM