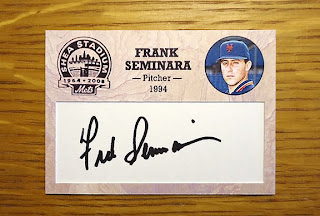 Frank Seminara was traded from the San Diego Padres along with Tracy Sanders and Pablo Martinez to the New York Mets in exchange for Marc Kroon and Randy Curtis on December 10, 1993. The Brooklyn native was an outstanding rookie in 1992. "Our hope is that he'll help our starting rotation," Ed Lynch, the special assistant to General Manager Joe McIlvaine said the day of the deal. "Hey, it's hard to go trade for a pitcher who can strike out 250 folks a year. We believe that Frank can be a successful pitcher at the major league level."

The right-hander was a boyhood fan of the team. "What can I say, I loved the Mets," Seminara said. "I was wearing their uniform when I was in sixth grade. That was my team. That was our whole family's team." Frank grew up playing stickball on the streets of his neighborhood only 10 minutes from Shea Stadium. He was organizing games at the age of five. Out of respect of his family's wishes, Seminara attended Columbia University. He had scholarship offers from several universities but applied only to Ivy League schools. "God blessed him with a brilliant mind," explained his father, Joe Seminara. "So you dream of your children inheriting the law practice that you worked so hard to build."

Frank was a member of the Mets bullpen at the start of the 1994 season. Joining the club from the minor leagues on April 30th when Dwight Gooden was placed on the disabled list. He was given one starting assignment on May 9th in Montreal. Throwing five innings in a 5-4 New York victory. Seminara made a total of 10 appearances and registered a 0-2 record and a 5.82 ERA. He was optioned back to Triple-A Norfolk on June 10th and finished the season there. Frank would sign with the Baltimore Orioles as a free agent on November 23, 1994.

Seminara has stayed around baseball by coaching his son's youth tournament team. He began a second career in financial management. Becoming a Senior Vice President of the Seminara Group at USB bank in Manhattan. Frank was named to Barron's 1000 Top Financial Advisors in March of 2011. "It's every kid's dream to play Major League baseball and it was a thrill and an honor to be one of baseball's top 750 players," said Seminara. "Most kids do not know what a Financial Advisor is, but the challenge to make it into this prestigious group of 1000 was as competitive as that of making it to the pros. And while as a pitcher standing on the mound I certainly felt a responsibility to my teammates and the fans, in my current role, handling other people's money, the responsibilities are in a league of their own."

Frank Seminara signed his card in the set from an autograph request sent to his home on September 2, 2010.

Special thanks to my friend Paul for pointing me to this photo of Frank in a Mets uniform. Before reading of the Bill Shultz baseball card set on his blog I never knew of it's existence.
Posted by LEE HARMON at 9:23 PM