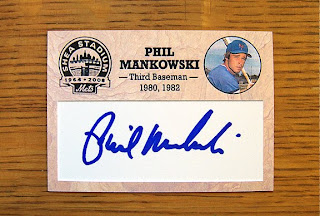 Phil Mankowski was traded with Jerry Morales by the Detroit Tigers to the New York Mets in exchange for Richie Hebner on October 31, 1979. The third baseman was brought in to serve as part of a platoon with Elliott Maddox. He made his Mets' debut on the second day of the season, April 11, 1980 at Shea Stadium. After just six game appearances Mankowski was placed on the disabled list with a shoulder injury. Once healed he was optioned to Triple-A Tidewater as part of baseball's new 20-day rehabilitation program. It was during this time that Phil was diagnosed with a case of hepatitis that unfortunately did not allow him to return to New York until September 23rd. He would only make a pair of pinch-hit appearances to close the 1980 season.

"It was great to put on the Met uniform and play at Shea Stadium," Mankowski remembered in 2016. "Unfortunately, I injured my throwing shoulder at the very start of training. It was a golden opportunity to come and have a position open for me. Healthy I honestly believe I would've played and proven myself there. But it wasn't supposed to be. I picked up hepatitis when the arm was ready and our season was almost ended after that."

After managing just a short season of 55 games back in Tidewater during 1981, Mankowski appeared healthy enough for a full 1982 campaign. Starting that year again with the Triple-A Tides club. Phil was returned to the major-league roster when Hubie Brooks was placed on the disabled list with a hamstring injury. He started at third base in Montreal on June 29, 1982, and remained in the Mets lineup until Brooks retuned on July 22nd. Mankowski had only managed a .229 batting average in his 13 games during that time.

"When baseball ended for me after the 1982 season, I moved to New York City to partner with Rusty Staub for nine years in the restaurant business." Phil shared when asked about life after his playing career. Mankowski served as a food sales representative for a total of 26 years until his retirement in 2017.
In 1984, Phil would return to baseball in a different role. He was cast as the fictional New York Knights third baseman, Hank Benz in the Robert Redford film, The Natural. "My ball parking days were over," said Mankowski. "I was working one day when one of my waitresses, who's also an actress, told me they were casting a baseball picture. She said, 'Why don't you leave a couple photos of yourself with the casting director?' I thought, 'Why not?' There must've been 300-400 guys trying out. I guess I hadn't lost much, so they took me." The film was shot at War Memorial Stadium in Phil's hometown of Buffalo, New York. "I received my Screen Actor's Guild (SAG) card and worked seven more years in New York City doing extra work," Phil explained. "Moving back to the Buffalo area stopped all that work!"

Phil Mankowski signed his card in the set from an autograph request sent to his home on October 30, 2009.