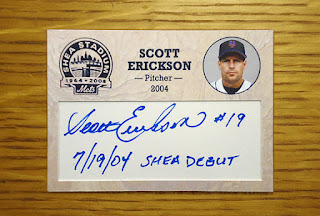 Scott Erickson joined the New York Mets as a free agent on February 5, 2004. The event of his signing a minor-league contract was the last of three big days for the former Minnesota Twins star. His 36th birthday was first. Followed by his wedding to former Monday Night Football sideline reporter, Lisa Guerrero the next day. "I wish spring training started tomorrow," Erickson was quoted from his honeymoon in Hawaii. "I'm ready to go."

Scott was coming off a season lost to shoulder surgery, and had previously missed the 2001 campaign recovering from Tommy John surgery. "We're lucky." Scott said. "With the way medicine has advanced, 15 years ago I'd have been finished." The right-hander pitched his way into the fourth spot of the Mets starting rotation with a strong spring training performance.

Erickson was scheduled to make his debut with the team facing the Atlanta Braves on April 9th. Eight minutes before the first pitch of the game at Turner Field, he strained his left hamstring while warming up in the bullpen. "It's unfortunate, after all the work to get ready with my arm, the leg sets you back," Scott said. "There was a lot of buildup for this." The Mets placed Erickson on the 15-day disabled list and recalled Jae Seo to the roster.

A rehabilitation in the minor leagues followed, but by mid-season he had worked his way back to New York. Scott made his comeback in front of 23,176 fans at Shea Stadium on July 19th. Erickson hurled six innings, giving up eight hits and was in position to win the game when he left. The Mets bullpen would falter and provide a 6-5 Florida Marlins victory. "There really wasn't as much emotion or nerves as when I made my first start after Tommy John surgery," Scott recalled. "I was more nervous getting ready in Atlanta earlier this year, to tell you the truth."

The veteran did not fair nearly as well in his next start for the Mets. Erickson would only last into the third inning, but allow seven runs to the Montreal Expos. New York would ultimately lose by a score of 19-10. A disappointed Mets team chose to designate him for assignment prior to the next day's game at Olympic Stadium. Scott was traded to the Texas Rangers in exchange for Josh Hoffpauir on July 31, 2004.

Scott continued to pitch until 2006. After retiring from baseball he began a new career as a motion picture producer. "And I basically left Yankee Stadium, flew out to Montana right onto the set and threw on a headset," Erickson remembered. "And it was perfect timing, in a sense, that my baseball career ended and my moviemaking career started basically within a week of each other." His first film was the 2007 release A Plumm Summer, which featured his wife, Lisa.

Scott Erickson signed his card in the set for my good friend, Jessie at the MAB Celebrity Services show in Fairfield, New Jersey on November 12, 2011.
Posted by LEE HARMON at 10:08 PM