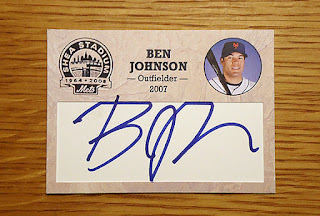 Ben Johnson came to the New York Mets along with Jon Adkins when they were traded from the San Diego Padres in exchange for Heath Bell and Royce Ring on November 15, 2006. "Ben Johnson is a versatile outfielder who can play all three spots, has speed and shown some power," said Mets general manager Omar Minaya. "He is just 25-years-old and we feel he has yet to reach his potential."

The outfielder began the 2007 season at Triple-A New Orleans, but was summoned to New York when Shawn Green suffered a chip fracture in his right foot. Ben joined the club on the road in Los Angeles. Waiting to make his Mets debut as a defensive replacement in right field facing the Giants back at Shea Stadium. He was hitless in two at-bats during New York's 5-4 victory over San Francisco on May 29th.

Johnson would appear in a total of nine games for the Mets before he was returned to New Orleans on June 11th. Ben was sent to the Zephyrs once Shawn Green was reactivated. During his time in New York he recorded five hits in 27 at-bats, including a double and RBI, for a .185 batting average.

While playing with New Orleans, Ben suffered a broken ankle attempting to slide into second base. "The worst injury that I had sustained up to that point was a broken hand," said Johnson. "This was by far the worst I had ever been injured." The fracture required surgery on August 6th. His recovery prohibited any return to the roster in 2007, and lingered as he attempted to make the team in spring training the next year. He was officially released on May 5, 2008. Team officials left Johnson an invitation to return to the organization if his condition ever improved.

Ben continued an attempt to return to baseball. He was signed as a free agent with the Detroit Tigers in 2010. Unable to reach the major leagues, Johnson became the assistant coach for the Arizona Centennials of the Freedom Professional Baseball League in 2012.

Ben Johnson signed his card in the set for my friend Dana Dominion before a Arizona Centennials game in June 2012.
Posted by LEE HARMON at 1:40 PM