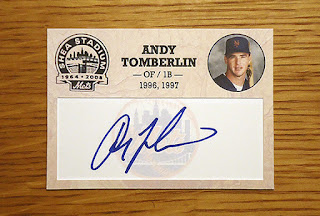 Andy Tomberlin was traded from the Oakland Athletics organization to the New York Mets on May 1, 1996. The left-handed outfielder was acquired to replace injured Mets prospect, Jay Payton at Triple-A Norfolk. Tomberlin was undrafted out of high school, but won a contract with the Atlanta Braves in a 1995 open tryout camp. "I wanted to be an outfielder," Andy said. "But they ran out of pitchers. They knew I could pitch so they asked me to come out of the outfield. I struck out the side, so they asked me to pitch another inning. I struck out the side again. So they signed me as a pitcher. But I still wanted to be an outfielder."

Tomberlin got his wish while in the minor-leagues and proved to be a valuable hitter there. He was promoted to New York in mid-June and made his debut with the club on June 17, 1996 facing the Pirates in Pittsburgh.

His first start resulted in his first hit with the team. Andy was the right-fielder and added his first home run in the sixth-inning of the Mets 5-3 loss to the Cincinnati Reds at Shea Stadium on June 20th. Tomberlin would enter 63 games for New York that season, but only 17 of those in the outfield. The majority of this appearances came as a pinch-hitter. He ended the year with three home runs, 10 RBIs and a .258 batting average.

A strong showing during spring training earned Andy a spot on the 1997 Mets opening day roster. Unfortunately a herniated disk in his back forced him to the disabled list on April 10th. He would not be able to play the remainder of the season. The free agent, Tomberlin played the next year with the Detroit Tigers before returning to the Norfolk Tides for the 1999 season.

"I'd like to start coaching and eventually manage," Andy told the New York Daily News in 1997. "I've invested too much time in the game not to put it to use after I am done playing." Tomberlin started that path first as a scout for the Milwaukee Brewers in 2001, and then moving to his first minor-league coaching position in 2003. He had progressed to the position of Triple-A hitting coach for the Charlotte Knights in 2012.

Andy Tomberlin signed his card in the set for me following the Charlotte Knights and Indianapolis Indians game at Victory Field on August 6, 2012.