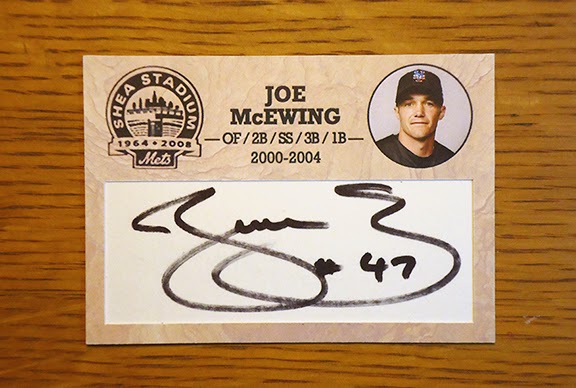 Joe McEwing came to the New York Mets when he was traded from the St. Louis Cardinals in exchange for Jesse Orosco on March 18, 2000. The versatile utility player was brought in with just five days remaining before the Mets completed spring training and headed to Japan for a special opening to the 2000 season. That timing was too short and forced Joe to begin his Mets career with the Triple-A club in Norfolk. "At first, I was hurt," McEwing said about the trade. "I'd be lying it I said it wasn't tough. It took me a good week to get back on focus. You understand the business side of the game. They needed a left-handed pitcher in the bullpen. It's a very humbling game."

"Super Joe" was the nickname that McEwing had earned in St. Louis during his 1999 rookie season. The 5-foot-11, 170 -pounder, established that he had the ability to play each of the infield and outfield positions at the major league level. That was secondary to the hustle he brought to every opportunity to help the team. Joe became an extremely popular player in New York after joining the Mets later in the 2000 season. He would continue to play the role of super-sub until his release from the club on March 17, 2005.

"You hate to pinpoint one," Joe said when asked his favorite memory from his days with the Mets. "Obviously fulfilling your childhood dreams, and that's competing in the World Series, and being able to play the Yankees. You figure the whole world is focused on one city. For that to happen, it's pretty special. And the biggest thing for me is being part of the relief efforts after 9/11. That holds the biggest impact, because it had nothing to do with the game. It was as a ballclub contributing to the city of New York and the country. That really sticks out and means a lot to me as an individual. To be able to take the pressures and everything off a lot of individuals for a couple of hours a night, to give peace and happiness and something positive to cheer for."

The reserve player contributed in a even further lasting way to Mets history. He served as the mentor to future All-Star David Wright during his rookie season. "David was easy," McEwing said. "David is a special kid and special person and a good friend. Every rookie that comes up, you just try to guide them the right way to go about things. I wasn't hard to guide David the right way. He has outstanding core values." Wright is proud to be part of McEwing's Mets legacy. "Real proud," David told MLB.com in 2005. "If people saw me play and thought of Joe. I'd like him to be remembered in New York. I want his influence to mold my character so I can be like him."

Joe returned during the 2008 season to pay his respects to Shea Stadium. "I needed to," explained McEwing about needing to see the park one last time. "It's such a historic place—in my heart anyway. I needed to see it before they knocked it down. I brought my son back to let him know that's where daddy played and it's not going to be here any longer."

Joe McEwing signed his card in the set from an autograph request sent to the Winston-Salem Dash team on July 13, 2009.
Posted by LEE HARMON at 11:26 PM