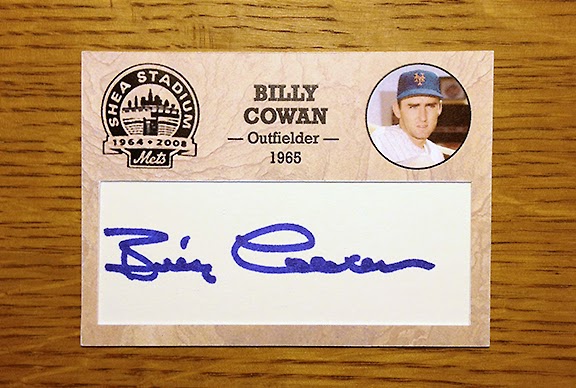 Billy Cowan was traded to the New York Mets from the Chicago Cubs in exchange for George Altman on January 15, 1965. Billy was coming off a fine rookie season in Chicago during which he had hit 19 home runs, and drove in 50 runs with a .241 batting average over 139 games. "Cowan adds speed, good defense, power and youth to the outfield," said Assistant to the Mets President Bing Devine. "This gives us another center fielder who has played regularly in the big leagues," legendary Manager Casey Stengel explained. "He can run and catch the ball. He has to cut down on the strikeouts and he can become a good hitter too."

Cowan made his debut with the New York Mets on Opening Day, April 12, 1965. The center fielder and leadoff hitter struck out three of his four at-bats facing Don Drysdale during the 6-1 loss to the Los Angeles Dodgers at Shea Stadium. It was June the 21st before Billy would hit his first home run as a Met. The blast proved to be the game-winner as the Mets defeated Claude Osteen, who had taken a no-hitter into the seventh inning by a 1-0 score.

The results were not what the club had hoped for when signing Cowan. The Mets began giving time in center field to both Cleon Jones and Johnny Lewis which affected Billy's playing time. When the team found themselves in need of a roster spot to return Ron Hunt from the disabled list, they sold Cowan's contract to Triple-A Buffalo on August 5th. The Mets later traded Billy to the Atlanta Braves for two players to be named later on August 10th.

Cowan ended his one year with the Mets hitting three home runs, 9 RBIs, a .179 batting average and striking out 45 times against just four walks. "I enjoyed being with the Mets," Billy said in a July 1969 interview.  "When I first came to the Mets they said I was gonna play center field regularly. I don't think I ever played a full two-week stretch."

Billy retired from baseball in 1972. He formed his own real estate investment firm, Bill Cowan Associates in Palos Verdes Estates, California. Spending most of his spare time playing golf and racket ball while raising three children and seven grandchildren with his wife, Allene.

He was inducted into the East High School Hall of Fame in his hometown of Bakersfield, California in 2012. "I have been inducted into a couple of others, but I don't think any of those mean any more to me than this one does." Cowan offered. "It is really a privilege.

Billy Cowan signed his card in the set from an autograph request sent to his home on October 6, 2008.
Posted by LEE HARMON at 1:08 AM