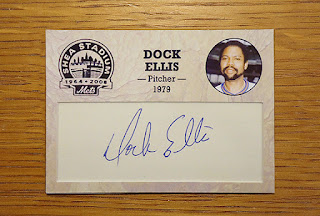 Dock Ellis came to the New York Mets when he was traded from the Texas Rangers in exchange for Bob Myrick and Mike Burhert on June 15, 1979. The flamboyant right-hander was a former National League All-Star with the Pittsburgh Pirates who claimed to throw his no-hitter against the San Diego Padres while under the influence of LSD. "I was as high as a Georgia pine," Dock said in the ESPN Outside the Lines feature on his career. The famous game was caught by future Mets catcher Jerry May on June 12, 1970.

There is no question that Ellis was a product of the wild 1970s and battling drug abuse. What made him stand apart was his courage and fearlessness both on and off the mound. "It's hard to find someone real in this world," former teammate Al Oliver offered when asked about Ellis. "Dock was for real. If he had something to say to you, he would say it to your face." The pitcher was a boisterous proponent for the African American athlete in a time when there were few brave enough to question inequality. His biography, "Dock Ellis in the Country of Baseball" was first published in 1976.

When he joined the Mets it was obvious that time had taken it's toll and the end of his pitching career was near. Dock started 14 games for the club and finished with a 3-7 record over 85 innings of work, posting a 6.04 ERA. On September 21st his contract was sold to the Pittsburgh Pirates where he would make his final start in the nightcap of a double header and retire from baseball on September 24, 1979.

Ellis entered a substance abuse treatment center in Arizona after leaving baseball and worked after that as a drug and alcohol counselor in California. At times working with prison inmates. The New York Yankees hired him in the 1980s to speak about substance abuse to their minor leaguers.

Film director Ron Howard cast Ellis in his 1986 movie, "Gung Ho". Dock is featured as a member of the American autoworkers softball team that play their Japanese managers.

"You know, I'm just clean and sober and going on about my business," Dock told the Dallas Observer in 2005. "But there's gotta be a place for me in baseball. I should be with baseball. But that's partly my fault, I alienated myself. I left baseball with the wrong impression about the people who ran the game. 'Cause I had that paranoia that everybody was out to get me."

Dock passed away in Los Angeles, California following a long battle with liver disease on December 19, 2008.

"He was so unique. He was viewed by some people as an outlaw, but he was far from that." his agent Tom Reich remembered. "He was so ahead of his time. He was so intuitive and smart and talented and independent. And he wasn't about to roll over for the incredible prejudices that existed at the time."

Dock Ellis's card is the set was created from an autographed index card in my collection.
Posted by LEE HARMON at 5:30 PM