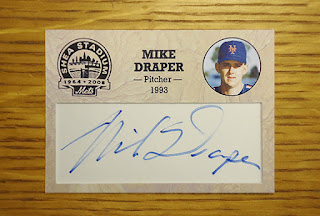 Mike Draper began his time with the New York Mets when they selected him from the New York Yankees in the Rule V Draft on December 7, 1992. The 26-year-old right-hander had set an International League record with 37 saves for Triple-A Columbus during the 1992 season. "With the stockpile of young pitchers they have, a guy like me has a tendency to get lost, with or without 37 saves," Draper said. "I guess there was something they didn't like about me. But I didn't get angry. It made me work harder."

As a Rule V pick the Mets would be required to keep Draper on the major league roster for the entire 1993 season or offer him back to the Yankees. The fact coupled with a strong performance in spring training camp earned Mike a place on the opening day club. "He doesn't have the kind of stuff that knocks your eyes out or a trick pitch that falls off the table." Mets manager Jeff Torborg said to the New York Times. " I don't know how to describe it except to say the kid knows how to pitch."

Draper made his major league debut in his first appearance with the New York Mets on April 10, 1993. Mike would pitch the final two innings of the 6-3 loss to the Houston Astros at Shea Stadium. Surrendering a run on four hits while striking out one batter. Mike was used with mixed results out of the bullpen for a club that was seriously struggling. On May 19th the Mets found themselves with a 12-25 record and 15 games behind the first place Philadelphia Phillies. "Four wins in three weeks," Torborg told the media following the loss in front of 6,000 home fans. "It's hard to imagine." The next day management replaced Torborg with new manager Dallas Green.

Draper would have the worst outing of the season on June 1st at Wrigley Field. He was called upon to preserve a 1-0 lead over the Chicago Cubs in the seventh inning. Mike promptly allowed three runs on three hits and was removed after only recording a single out. He was charged with his first official loss in the 8-3 final.

The rookie's role in the bullpen was becoming different. He was not called upon late and began to only enter into games when the team was trailing. There would be significantly longer periods of time between his appearances as well. Late in the season on August 5th, the Mets gave up a 9-1 lead to the Montreal Expos only to hang on and win in extra innings. Draper was credited with his first major league victory after retiring the side in the 12th inning. It was only the second time he had pitched in the previous 22 games.

Mike played in the San Diego Padres organization at the Triple-A level during the strike shortened 1994 season and then was out of professional baseball in the United States. He would finish out his career with two additional years in Mexico.

Draper lived in Florida working at a furniture warehouse and as a landscaper. He would continue to be around the game of baseball playing in a men's recreational league. His Sports Page Rockets would claim the Palm Beach County National Adult Baseball Association championship in 2001. "I've been pitching pretty well recently," he said after the victory. "My arm has been feeling great and we battled all day. But we've been doing that all season. That's part of what makes this team as great as it is."

I created Mike Draper's card in the set from an autographed index card obtained from Bob Dowen on March 4, 2011.
Posted by LEE HARMON at 12:03 AM