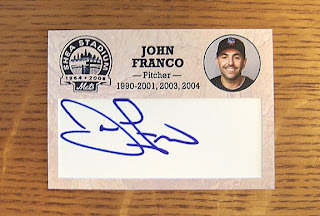 John Franco became a New York Met when he was traded with Don Brown from the Cincinnati Reds in exchange for Randy Myers and Kip Gross on December 6, 1989. That began a rich career in New York that featured being named the Rolaids Relief Man in 1990. John is a native of Brooklyn. His father, Jim Franco was a New York City Department of Sanitation worker who encouraged his son's baseball aspirations. John honored his dad by wearing an orange Sanitation Department work-shirt under his jersey. He served as the team's closer through the 1999 season and was a big part of the 2000 National League Championship club. Franco became the third ever Met's captain on May 4, 2001 following a unanimous team vote.

New York Mayor, Rudolph Giuliani in celebration of Franco's 400th career save presented the left-handed reliever the "Key to the City", and declared April 27, 1999 as "John Franco Day". Mayor Giuliani said, "John is a hometown hero and proof that there are plenty of people in professional sports worthy of our admiration and respect."

He was invited to throw out the ceremonial first pitch before the St. John's vs. Georgetown Big East college baseball game at the new Citi Field on March 29, 2009.


Franco was inducted into the Mets Hall of Fame in 2012.

John Franco signed his card in the set for my friend Sam during the B.A.T Fundraising Dinner on January 27, 2009.
Posted by LEE HARMON at 9:18 PM