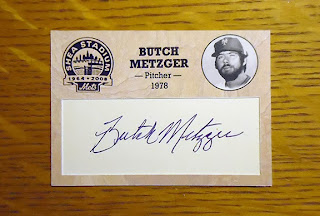 Butch Metzger came to the New York Mets when they purchased his contract from the St. Louis Cardinals on April 5, 1978. The former 1976 Rookie of the Year, made his Mets debut just three days later on April 8th. Throwing to just five Montreal batters in the sixth inning while recording one out and surrendering two runs that day at Shea Stadium. His struggle with control of the strike zone was his downfall.

Metzger would make a total of 25 appearances for New York, and proved to be ineffective from the bullpen. He finished with a 1-3 record and 6.51 ERA. His contract was sold to the Philadelphia Phillies on July 4, 1978. He was returned to the minors and never pitched in another major league game.

After his pitching career, Butch has served as a scout for the Texas Rangers covering the Northern California region. Most notably discovering Seattle Mariners prospect, Brodie Downs.

Butch Metzger signed his card in the set from an autograph request sent to his home on September 27, 2013.
Posted by LEE HARMON at 2:38 PM