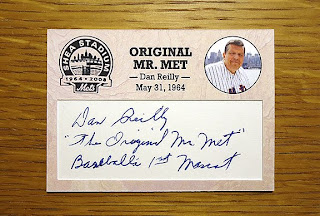 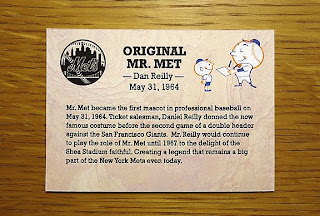 Players come and go as the seasons change, but one figure has endured throughout the entire Mets' history in Shea Stadium and now beyond. The iconic image of "Mr. Met". So as I was determining the "Special Moment" cards for The Amazing Shea Stadium Autograph Project it just had to include Mr. Daniel Reilly.
Dan's journey with the Mets began during the winter of Shea Stadium's construction. "It was a snowy February morning the day of my interview," Reilly recalls. "From the outside, it looked like an orange-and-blue skeleton. Nothing was happening and nobody was around. Inside they were still putting the seats in." He was hired by the team as a member of the ticket sales staff.
Much like the transformation of Clark Kent into Superman, this mild-mannered ticket salesman was about to have his destiny forever changed. This time instead of with a cape his identity would be altered using a massive papier-maché globe. The Mets public relations department had come up with an original idea. To create the first uniformed mascot in baseball history. It was determined that no one would be better suited for the assignment than the jovial Dan Reilly. "Baseball was not as commercial as today," Dan said, "Mr. Met was to entertain the children." A character who, up to that time, had only been seen as an illustration in the 1963 Mets Yearbook. The team hired an artist to sculpt the large baseball-shaped head that would bring him to life. Reilly would describe it as clumsy and having no ventilation at all, and "It had a ring inside that went around your head like you were going to the electric chair." Paired with a non-numbered Mets uniform (the "00" would appear later) he was ready.
Dan made history on May 31, 1964. It was determined that the debut of Mr. Met would occur between games of a double-header facing the San Francisco Giants. "The stadium was packed and I was nervous," Reilly recalls. "They had told me to play it straight, just walk out there and wave. but the kids started swarming down to meet me in the stands. I shook hands, posed for pictures, signed autographs. After that, I got cocky and started dancing. It was an instant hit. Back then, the fans might not have recognized the players, but they recognized Mr. Met."
He was even pressed into service to assist Mets' corporate sponsor, Borden's Dairy during the Macy's Thanksgiving's Day Parade in 1965. As the famed "Elsie the Cow" hot-air balloon traveled down the streets of New York the parade spectators were treated to a cycling Mr. Met circling underneath. "I wish I could find a picture of that," Dan said, "me riding that bicycle with that head on."
Reilly would continue his dual role as ticket salesman and mascot until 1967. Along the way creating a bond with the fans that would remain to this day. He also had a unique friendship with the players of those years. "We were a small organization back then, no superstars," said Dan. "I drank with those guys. I knew where all the good Irish bars in Queens were. And I knew when to keep my mouth shut. That's why everyone liked me."
The original Mr. Met would later move into the promotions office and also serve as a V.I.P. handler for visiting celebrities and politicians, run the Mets' Speakers Bureau program and fill in as public address announcer at Shea Stadium for three weeks in 1966. All part of a rich career in the Mets' organization that lasted until 1973.
Dan has recounted his experiences in the book, "The Original Mr. Met Remembers: When the Miracle Began." which he published in 2007.
Mr. Met was enshrined in the Mascot Hall of Fame in 2007. The original Mr. Met head was entered into the Mets Hall of Fame Museum at Citi Field for the opening of the 2010 season.
"Baseball is tradition," Reilly explained during his last visit to the dismantled ballpark, "Mr. Met touched people then, and he still does. I think it's important to remember how we used to do it, what Shea used to be like. If we do there will always be a Shea Stadium."
Dan Reilly signed his card in the set for my friend, Jessie in New York City on March 10, 2010. Adding the amazing inscription of "The Original Mr. Met, Baseball's First Mascot."
Posted by LEE HARMON at 7:16 AM