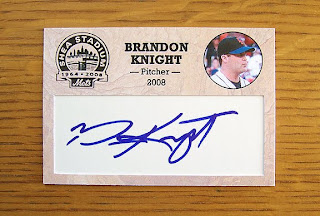 Brandon Knight joined the New York Mets when he signed a free agent contract on May 29, 2008. He made his Mets debut on July 26th, when he was granted an opportunity to start in place of Pedro Martinez. The future Hall of Famer, Martinez had left the team to travel home to the Dominican Republic following the death of his father.

Knight had battled to remain in baseball previous to his time with the Mets organization. Spending time in Japan and Mexico along the way. His most recent assignment had been pitching for the Somerset Patriots in the Independent League. "Over the last couple of years it has definitely been a roller coaster," said Brandon. "It's amazing how this game is, how life is. How much it can change — like that."

Strange as it was the pitcher had also been selected to participate for USA Baseball during the Summer Olympics in Beijing, China. "It's almost too much good news all at once," said his father, Mike Knight. "He was ready to get out of the game and all of a sudden got back in and now all kinds of great things are happening." After his one start for the Mets it was decided to designate him for assignment so the right-hander could participate in the Olympics. Team USA and Knight won the Bronze Medal with a victory over Taiwan.

Brandon returned to Triple-A New Orleans until he was recalled in September when rosters expanded and bullpen help was needed. "This feels like it's settled down a bit now that I'm finally here and had some time to throw a couple of games from the bullpen." Knight said. "To be honest it is probably the most comfortable I've been all year." He was given one final start on September 17th in which he earned his only victory as a New York Met.

Brandon Knight signed his card in the set for my friend Dan Viglietti after the game between the Indianapolis Indians and Buffalo Bisons at Dunn Tire Park, in New York, on June 10, 2009.
Posted by LEE HARMON at 1:16 PM