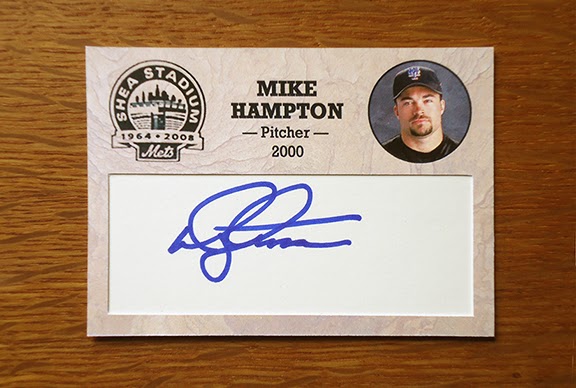 Mike Hampton was traded along with Derek Bell from the Houston Astros to the New York Mets in exchange for Roger Cedeno, Octavio Dotel, and Kyle Kessel on December 23, 1999. The All-Star pitcher was in the final year of his contract with the Astros, who felt they had no chance of resigning the impending free agent. "I didn't ask for a trade, but it didn't come on a whim. There was a lot of thought," said Hampton upon coming to New York after telling Houston he would not negotiate a long-term deal with them. "No, I didn't have any second thoughts. I made a decision and I'll stick it out until the end of the season and take it from there."

Mike pitched well for the Mets during the 2000 regular season. A fierce competitor who ended the year with a 15-10 record and 3.14 ERA. In his 33 starts for New York, Hampton threw three complete games including a shutout. On August 17th he strained an oblique muscle, but missed only one start due to the injury. He explained, "It's late in the season. I'm not out there just trying to get through. I'm out there trying to help my team win." Mike was selected as the pitcher on the National League Silver Slugger team for 2000. Evidence of his ability to help a team both on the mound and at the plate.

As good as Hampton was during the season he was even better in the National League Championship Series. Mike was dominant in his two starts facing the St. Louis Cardinals. The left-hander won the series opener by shutting out the Cardinals during his seven innings of work. Then followed that with a complete game victory in Game 5 while striking out eight batters. Hampton will be remembered by Mets' fans for the image of him raising his fist triumphantly into the air at the conclusion of that game. Mike had led the Mets back to the World Series and was named the NLCS Most Valuable Player. "I'm close," he said, wiping champagne out of his eyes after clinching. "The way I see it, we still have four to win to fufill that fantasy. We're content, but we're still four away."

The Mets would fall to the New York Yankees in the Subway Series of 2000. Mike was the starting pitcher in Game 2, but did not have quite the same success as before. Matching up against Roger Clemens at Yankee Stadium he would be given the loss that evening. Hampton surrendered four runs during his six innings of work in what would become a 6-5 defeat. The 2000 World Series was won by the Yankees four games to one.

Mike would sign with the Colorado Rockies as a free agent on December 9, 2000.

He developed the Mike Hampton Pitching In Foundation that assists many local Florida charities and youth based organizations. In 2003 it awarded it's first scholarships to deserving area high school seniors.