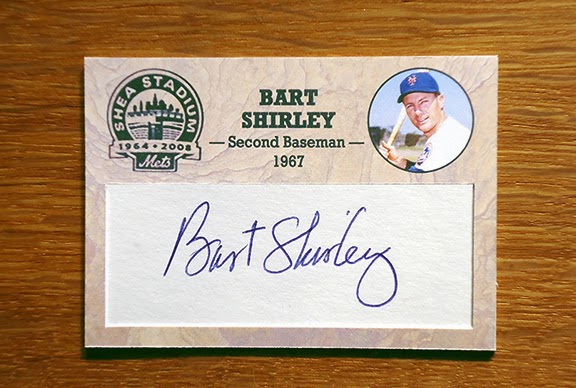 Bart Shirley was drafted by the New York Mets from the Los Angeles Dodgers in the Rule V Draft on November 28, 1966. A native of Corpus Christi, Texas who attended the University of Texas on a football scholarship. Bart was pleased to have a new opportunity with the Mets. "Playing behind "the Captain", Maury Wills was a slow process" Shirley offered about the Dodgers legendary shortstop.

The infielder started the 1967 season with the Mets. Making his debut with the club striking out as a pinch-hitter in Philadelphia during New York's 5-1 loss to the Phillies on April 14th. Bart would score a run as a pinch-runner against the same Phillies the next day.

His favorite memory of Shea Stadium? "I has to be the fans." Shirley remembered in 2014. "They loved their Mets, and it showed." Bart got his first of three starts at second base at Shea. After just six games with New York he was offered back to Los Angeles on May 18th. "I didn't want that to be, but going hitless, and the youngster, Bud Harrelson playing well shortened my stay." said Shirley. "I was glad that the Dodgers wanted me back."

After completing a four-year career in the major leagues he joined the Spokane Indians baseball club as a player-coach under Tommy Lasorda. His baseball journey then took Bart to Japan in 1971. He played and coached for the Chunichi Dragons of Nagoya. Seeing his success overseas the Los Angeles Dodgers brought the former player back to manage three seasons within their minor league system.

Shirley returned home to Corpus Christi in 1978. Beginning a new career in the insurance industry, and has worked with agencies and as an independent agent since 1990. He was able to remain involved with baseball as an employee of the local minor league, Corpus Christi Hooks ballclub. The team honored Shirley with the Lifetime Achievement Award in 2009.

"Bart was obviously an accomplished multi-sport athlete and built an impressive baseball resume over many years," Hooks President, Ken Schrom said. "But more importantly, he's a wonderful human being. I've talked to guys who played with him at Ray and they say he exuded class as a high school student. You'll never hear an adverse word from or about him. That may seem like a simple legacy, but you couldn't ask for a better one."

Bart Shirley signed his card from the set for me through my friend, Nick Bean in Corpus Christi, Texas on April 6, 2010.
Posted by LEE HARMON at 11:54 AM