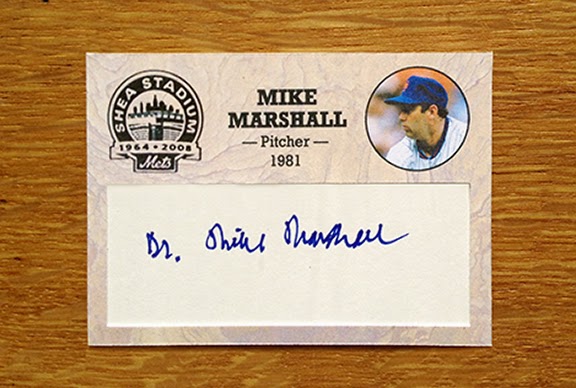 Mike Marshall joined the New York Mets when he was signed as a free agent on August 19, 1981. The right-handed reliever had been out of baseball since pitching for the Minnesota Twins in June of 1980, and had failed to start with a team following the resolution of the labor strike in 1981. "I wanted to see if Mike could still do it physically," said the Mets' manager, Joe Torre of the four-day tryout he gave Marshall two weeks earlier. "It's obvious he had it. Mike throws a good screwball and a good slider. Anybody with pitches that go two ways is tough. Plus he, knows how to win—he's proved that."

Mike was actually "Dr." Marshall  with a Ph.D. in kinesiology, and taught the subject at both Michigan State University and St. Cloud State University in Minnesota. He believes that his studies have allowed him to develop a better pitching motion. "I know the injurious flaws in the 'traditional' baseball pitching motion that injure baseball pitchers and how to eliminate all pitching injuries." Marshall states on his website. "I also know the mechanical flaws in the 'traditional' baseball pitching motion that decrease velocity, release consistency and the variety and quality of pitches pitchers can throw and how to correct these mechanical flaws."

The veteran was an innovator throughout his pitching career. Mike was one of the first relievers to run in from the bullpen, and insisted that despite the established mindset he could pitch nearly every day. He proved it correct in 1974 while setting the major league record of most appearances during a single season with 106.

With New York he would appear in 20 games and post a 3-2 record, with eight strikeouts, and a 2.61 ERA during 31 innings of work. Marshall felt that his work as a union representative with the Major League Baseball Players Union led to his exit from many teams. The conclusion of his career with the Mets was no different. "The Twins released me the year before. And then in that year there was no season 'til near the end." explained Mike in 2012. "I don't touch a ball in that entire time, then I go in there and have a 2.6 ERA. And that's something, because I'm not fit, I don't have quality on my pitches, and I'm still able to do that. I fully expected that I would be pitching the next year, and planned to, but the Mets released me, because the manager didn't like this guy that got free agency into professional baseball."

Dr. Marshall formed his Pitchers Research/Training Center in Zephyrhills, Florida after leaving the game. He also hosts a website and is a featured lecturer about his pitching philosophy and technique. Only one of his students has been able to introduce their unusual new throwing motion into the professional leagues. Jeff Sparks threw briefly with the Tampa Bay Rays team, but was determined as difficult to work with and returned to the minor leagues. "The coaches aren't interested in learning," Mike says. "They just demand that the kids change back." Marshall's school was closed when a special-exception request for home-schooling was denied by Pasco County. Mike contended that it was not a business because he does not charge a fee only room and board for his students.

During his playing days Mike was notable as a rare ballplayer that refused to sign autographs for even the young fans. "As an athlete, I am no one to be idolized," He once said at the ballpark while denying a fellow teammates son his signature on a baseball. "I will not perpetuate that hoax. They say I don't like kids. I think that refusing to sign autographs, I am giving the strongest demonstration that I really do like them." Instead Dr. Marshall has only relaxed his unwillingness to sign for fans through two limited signings where he charged $250.00 and $185.00 or more per autograph.

Mike Marshall signed his card in the set during Chris Potter's private signing with him on April 10, 2012.
Posted by LEE HARMON at 10:26 PM