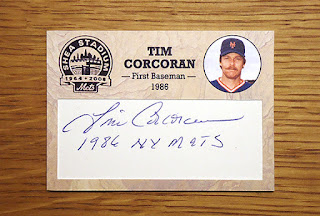 Tim Corcoran was signed as a free agent by the New York Mets on March 4, 1986. The club was looking for a left-handed bat from the bench and saw the veteran as a possible solution. The Mets first assigned the first baseman/outfielder to the Triple-A Tidewater Tides, but Manager Davey Johnson shared that he might be regarded "insurance" if Keith Hernandez were suspended by Major League Baseball for any length of time for past involvement with drugs.

Tim enjoyed a strong spring training and seemed poised to make the opening day major league roster. The last cuts to achieve the 24-man roster from training camp were Ron Gardenhire and Doug Sisk. Both players had to clear waivers, so Corcoran was not officially added to the Mets roster until days after the season began. He seemed to make his New York Mets debut on April 24, 1986. Announced as the pinch-hitter in the sixth inning of a game facing the Cardinals in St. Louis, he was pulled back when a call to the bullpen brought in a left-handed reliever. So his first actual chance to hit came on April 29th at Fulton County Stadium when he grounded out to second base as a pinch-hitter in the 10-5 Mets victory over the Atlanta Braves.

The Mets sent Corcoran back to Triple-A Tidewater on May 8th. They needed the roster spot for outfielder Mookie Wilson who was activated following his recovery from an eye injury sustained during spring training. The move to the Tides would last a month before Tim was promoted back to the big leagues.

Corcoran made two pinch-hit appearances at Shea Stadium. They were the only two home games he would enter as a Met, and both came facing the San Diego Padres. He lined out to the shortstop on June 3rd, and drew a walk the next day during New York's 4-2 win on June 4th.

The last day of his New York Mets career came on June 6th at Three Rivers Stadium. In the first game of that day's double header with the Pirates he pinch-hit for Ron Darling and grounded out to the pitcher. Corcoran gave Keith Hernandez a rest in the second game and was given the start at first base. Tim grounded out in three of his at-bats, but did draw a walk and was on base for Rick Aguilera's home run during the 10-4 New York rout of Pittsburgh.

The Mets officially released Corcoran on June 9th, but after clearing waivers he completed the year with Tidewater. In 86 games for the Tides he hit one home run, with 24 RBIs, and a .260 batting average. He was hitless in seven at-bats for the eventual 1986 World Champion New York Mets that year.

Tim played two more seasons of minor league baseball in the Philadelphia Phillies system before ending his playing career. Following that he returned home to California, and became a professional scout for the Anaheim Angels. He won "The Nick Kamzic Award" as the Angels' Scout of the Year in 2000.

Corcoran led California State University, LA to back-to-back Pacific Coast Athletic Association championships in 1973 and 1974. He was inducted into the Golden Eagles Hall of Fame in 1985.

Tim Corcoran signed his card in the set for my good friend Jessie during the JP's Sports & Rock Solid Promotions "Fall Classic Show" in White Plains, New York on October 5, 2012.
Posted by LEE HARMON at 11:11 AM