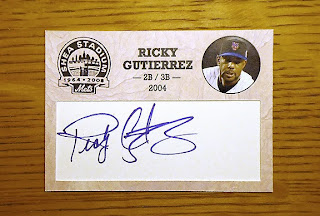 Ricky Gutierrez came to the New York Mets on March 29, 2004. He was traded from the Cleveland Indians along with cash to the Mets for a player to be named later. (The Mets would later complete the deal by sending cash considerations in lieu of a player.) A serious injury forced Gutierrez to undergo risky surgery in October 2002 which fused two vertebrae in his neck. His return to baseball was questionable. During that year's spring training camp he had proved able to play, but the Indians were unable to find a roster spot for the veteran middle infielder. "I'm just happy that someone else wanted me," Ricky said before leaving Cleveland's camp.

"Ricky overcame odds that no one thought he could," Indians general manager Mark Shapiro said. "This guy is a pro, and I don't use that word lightly." The Mets were looking at Gutierrez to back up José Reyes who had been moved to second base to accommodate the addition of Kaz Matsui at shortstop. When Reyes suffered a hamstring injury at the end of spring training it placed Ricky as the starting second baseman on Opening Day. Gutierrez made his Mets debut hitting a single in his first at-bat at Turner Field on April 6th during the 7-2 New York victory over the Atlanta Braves.

The 33-year-old Gutierrez was playing everyday with Reyes on the disabled list. Unfortunately his slumping bat was became an issue because of that. In 24 games he managed 11 hits in 63 at-bats, while driving in 5 runs for a .175 batting average. The Mets chose to replace Ricky with a prospect in Triple-A named Danny Garcia. Gutierrez was released by the club on May 25, 2004.

Ricky finished the season on a high note. He was first picked up by the Chicago Cubs and then traded to the Boston Red Sox. There he became part of their historic 2004 World Series Championship.

Ricky Gutierrez signed his card in the set during the GBSCC Shriners Show held by Sure Shot Promotions on November 4, 2012.
Posted by LEE HARMON at 4:49 PM