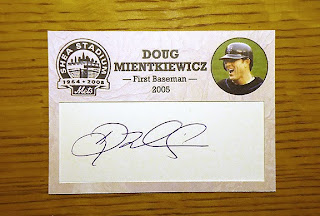 Doug Mientkiewicz was traded from the Boston Red Sox to the New York Mets in exchange for minor league prospect Ian Bladergroen on January 26, 2005. Doug had been a part of the 2004 World Series Champions, but lost favor with the team over a misunderstanding about the game ball involved in the final out. The first baseman Mientkiewicz kept that ball at the conclusion of Game Seven. Even though he had acknowledged this from the beginning, the Boston ownership appeared confused later when it was not surrendered back to them.

The Mets were glad to obtain the sure-handed Mientkiewicz once their preferred off-season option for the position, Carlos Delgado signed a free agent contract with the Florida Marlins. "I thought if we could not get that power bat that Delgado is, the best way to go was to go out and get as good a first baseman as possible," Mets general manager Omar Minaya explained. "Mientkiewicz is a former Gold Glove winner. To bring him on board, I think it just makes our defense better."

Doug made his Mets debut on Opening Day, April 4, 2005 facing the Reds in Cincinnati. Collecting two hits in the 7-6 New York loss. As the season moved on it saw the veteran left-handed hitter surprisingly hitting for a low batting average, but delivering more home runs. On just May 9th, he hit his sixth round-tripper to decide a 7-4 victory over the Chicago Cubs at Wrigley Field. That number equaled his output from all the previous year. "We didn't expect him to hit this many home runs," Mets manager Willie Randolph acknowledged. "He's got his share so far. He's got some big ones for us."

The team loved his clubhouse presence, but by late May he had dipped to a .200 batting average and the eight spot in the batting order. "I feel this sickness." a disgusted Doug told the media. At the time actually apologizing to "every Mets fan in America." The decision was made to begin offering more playing time to Chris Woodward and Miguel Cairo at first base. Then called up Brian Daubach from Triple-A to man the position on June 16th.

Matters were complicated more when Mientkiewicz suffered a right hamstring injury while on the on-deck circle June 26th. "Pull a muscle in the on-deck circle. how do you do that?" Willie Randolph questioned. Doug was placed on the 15-day disabled list, and the Mets recalled Jose Offerman from Triple-A Norfolk. Mientkiewicz would return to New York, but serve a second stint on the DL in August. Doug injured his lower back breaking up a double play at Shea Stadium in a game facing the Milwaukee Brewers. Just as he began to turn his offensive woes around. This time the Mets replaced him with prospect Mike Jacobs who enjoyed immediate success, and looked to be the first baseman of the future.

The club declined it's option on Mientkiewicz for the 2006 season, and he signed with the Kansas City Royals as a free agent on December 16, 2005. Doug finished his one year with the Mets hitting 11 home runs, 29 RBIs, and a .240 batting average in 87 games. "I'm a very humble person with the bat," Mientkiewicz explained. "I'm very confident with the glove in my hand."

Doug Mientkiewicz signed his card in the set during the GBSCC Shriners Show held by Sure Shot Promotions on November 4, 2012.
Posted by LEE HARMON at 6:43 PM