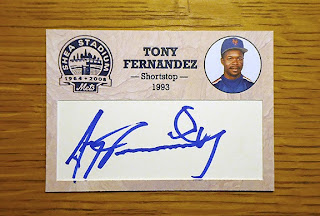 Tony Fernandez joined the New York Mets when he was traded from the San Diego Padres in exchange for D.J. Dozier, Raul Casanova and Wally Whitehurst on October 26, 1992. The veteran shortstop had been a former All-Star with the Toronto Blue Jays. Winning a World Series title with the Jays in 1993. Club economics forced the Padres to deal away Fernandez to a Mets team in dire need of a established shortstop.

"While he might have lost a step along the way, this guy is an offensive catalyst," said Mets' assistant vice president of baseball operations, Gerry Hunsicker. "I think we can expect he'll hit .270, .280 for us. I think he's a very productive player and wouldn't be surprised if he's in the All-Star game next year."

When spring training for the 1993 season began it did look as if the Mets had found their man to compliment second-year man, Jeff Kent up the middle of the infield. "The heart of any defense starts with the shortstop and Tony's going to give us a lot." Kent offered to reporters in March. "He'll add the spark to the flame and we're going to ride his coattails."

Fernandez struggled both offensively and defensively once the season began. The switch-hitter made his Mets debut on Opening Day at Shea Stadium on April 5, 1993. He collected his first hit in a New York uniform the next day, but uncharacteristically also committed two errors. On April 26th it was learned that Tony had been playing through discomfort in his right abdominal area. The pain coming from a kidney stone in his lower urinary tract. The Mets sidelined him a couple of days until he was able to pass the stone. The former gold-glove shortstop registered two more errors in the 10-5 New York loss to the San Francisco Giants at Candlestick Park on April 28th.

On June 11, 1993, the Mets traded Fernandez to the Toronto Blue Jays in exchange for outfielder Darrin Jackson. Tony bothered by a variety of thumb injuries had appeared in 48 games and registered one home run, 14 RBIs and a low .225 batting average. "I do not think it was enough games to judge if a man can produce," Fernandez said at the time of the trade. "But I respect their decision. I'm sad that I let people down." Tony appears to have been correct as he finished the 1993 season in Toronto batting .306. He would also go on to play six more seasons and became an American League All-Star again in 1999.

Tony Fernandez signed his card in the set during a private signing held by Craig Nyman in Surprise, Arizona on March 17, 2013.
Posted by LEE HARMON at 10:16 PM