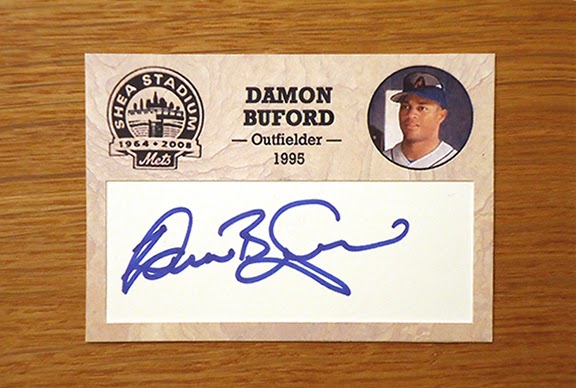 Damon Buford became a member of the New York Mets when he was traded from the Baltimore Orioles along with Alex Ochoa, and Jimmy Williams in exchange for Bobby Bonilla on July 28, 1995. He had the unusual experience of actually being traded by his father, former major leaguer Don Buford.  The elder Buford held the position of assistant director of player development with the Orioles and had orchestrated the deal with New York. "The trade came out of the blue, but my dad sees it as an opportunity," Damon said. "He's my dad first." It was a chance to return from Triple-A Rochester back to the major leagues.

The Mets inserted Damon into the starting lineup immediately. He made his debut with the team as the left fielder at Shea Stadium that same day. Buford delivered a base hit in the 2-1 victory over the Pittsburgh Pirates. The new player found a friend in the Mets veteran center fielder Brett Butler. "The first couple of games I was nervous," Damon said. "I felt like it was spring training all over again. But it was great to be around Butler. I sat next to him on the bench and I talked to him in the outfield. I learned more from him in the past two weeks than I have in the last couple of years."

Buford inherited the leadoff spot in the batting order when Butler was forced to temporarily leave the club to address the death of his mother. Following his return to New York, Brett was later traded to the Los Angeles Dodgers on August 18th. His departure made Damon's move permanent.

On September 13th he recorded the first multiple home run game of his career. Buford slugged two blasts while driving in five runs during the 10-5 win over the Houston Astros at Shea. "I just felt I was in a comfort zone." Damon said. "I felt I could do anything, that if I took a short, quick swing, I could hit the ball out. I've got that feeling at the plate now"

Unfortunately he did not finish the season as strongly. He collected just five base hits in his final 25 at-bats of the year. Damon finished with a .235 batting average, four home runs, 12 RBIs and seven stolen bases during his 44 games with New York.

The Mets traded Buford to the Texas Rangers in exchange for minor league outfielder, Terrell Lowery on January 25, 1996. Damon would play for the Rangers, Boston Red Sox and Chicago Cubs until 2001.

After baseball, Buford has operated several tanning salons in Arizona with his wife, Sara Neeley-Buford. The couple are also part of 2nd Serving Foundation a mobile food bank serving the Phoenix community. Damon was named their Chairman of the Board of Directors in January 2013.

Damon Buford signed his card in the set through a private signing held by Signatures4U on March 12, 2014.
Posted by LEE HARMON at 1:03 AM