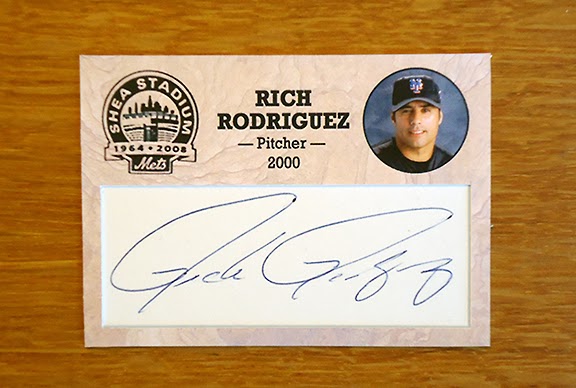 Rich Rodriguez was first a part of the New York Mets organization when they drafted the native Californian out of the University of Tennessee in the 9th round of the 1984 amateur draft. He would pitch as high as Double-A Jackson in 1988 before the Mets traded him to the San Diego Padres for two other minor leaguers on January 13, 1989.

The left-hander returned to the Mets as a major league veteran when they signed him to a two-year, $1.5 million contract in January of 2000. He was officially added to the 40-man roster on February 8th.

Rodriguez made his New York Mets debut during the very unusual "Opening Day" on March 29th at the Tokyo Dome in Japan. He would allow a home run to Mark Grace during his inning of work in the 5-3 loss to the Chicago Cubs. His first appearance at Shea Stadium came days later on April 5th. Rich was effective that game. Striking out four and scattering two hits across three innings of work facing the San Diego Padres.

The southpaw began to struggle with surrendering the long ball after that. He has victimized for three home runs from the Philadelphia Phillies in his next two appearances. "It's only May, and I am going to turn it around," Rodriguez said at the end of the month. "It is going to get better; it will happen soon." Rich had allowed runs in eight consecutive relief appearances before the Mets relegated him to limited bullpen duty. The veteran accepted a demotion to Triple-A Norfolk on June 28th. "After so many years, that adrenaline flow needs to be there to have a real competitive edge," Mets manager Bobby Valentine explained to The New York Times. Bobby felt that the lack of use in critical spots may have contributed to the 7.67 ERA of Rodriguez.

Rich was recalled in July and continued to struggle. That resulted in a return to the Norfolk Tides which lasted until rosters expanded in September. Rodriguez was brought back to a Mets club playing for a postseason appearance. He would pitch in four more games and allow runs in three of those. During the 2000 campaign he threw 37 innings allowing 59 hits with a 7.78 ERA.

The Mets released Rodriguez on March 29, 2001. Exactly one year to the day of his debut with the club in Japan.

He would pitch more effectively with three different American League teams before retiring from professional baseball in 2003 at the age of 40. At that point he began work on the High School level as a pitching coach in California. In January of 2012 he joined Elite Nine Baseball Camps and Clinics as a pitching instructor. He is joined there by fellow former Met player, Gregg Jefferies.

I created Rich Rodriguez's card in the set from an autographed index card given to me by my friend, Jessie through the good people at City Liquidators on March 8, 2014.
Posted by LEE HARMON at 12:50 PM