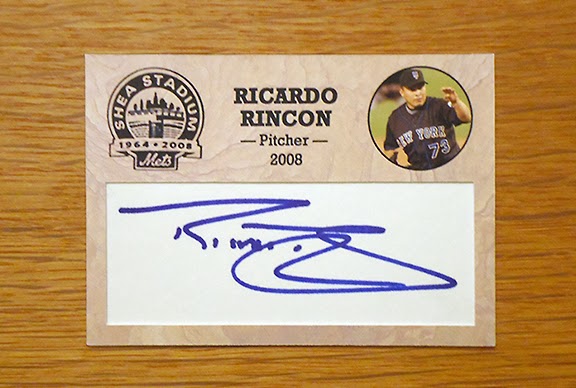 Ricardo Rincon was signed by the New York Mets as a minor league free agent on January 23, 2008. The 37 year-old left-hander had appeared in 557 games over a 10-year career in the major leagues. Rincon had not pitched in the big leagues since appearing in five games two years earlier with the St. Louis Cardinals. He was coming off a torn ACL in his right knee that followed a year that had ended with surgery to repair a torn labrum and rotator cuff. The Mets invited the veteran to spring training camp with a chance to become a member of the bullpen.

Rincon surprised many with a fastball that reached 90-91 miles per hour during the Grapefruit League schedule. It was still not enough for him to break into a full roster heading north to New York. The Mets did not choose to option him to Triple-A New Orleans. Instead in an effort to allow Ricardo to remain closer to home, his contract was loaned to the Mexico City Reds of the Mexican League on April 2nd. He would pitch 42 games in Mexico with a 0-2 record, two saves and a 3.82 ERA.

It was time for Rincon to return to the major leagues when rosters expanded towards the end of the 2008 season. The Mets brought him to New York to supplement an extremely tired bullpen for a team that was beginning to surrender leads late in games. Ricardo made his debut with the club on September 5th getting the first two outs of the ninth inning during the 3-0 loss to the Philadelphia Phillies at Shea Stadium.

The lefty would be called upon to preserve the victory during the final start of Pedro Martinez's Mets career on September 25th. Rincon entered the game and surrendered a three-run home run to Chicago Cubs rookie, Micah Hoffpauir on the first pitch. It would be the final pitch that Rincon would throw in his major league career.  The New York Mets granted the veteran free agency at the end of the season. Ricardo ended his brief Mets tenure with eight appearances, striking out three batters and walking one while registering a 4.50 ERA.

Rincon continued to pitch occasionally for his hometown Diablos Rojos club for a number of years to follow.

Ricardo Rincon signed his card in the set for Ricardo Lopez before a baseball game in Tijuana, Mexico on August 23, 2013.
Posted by LEE HARMON at 9:42 AM