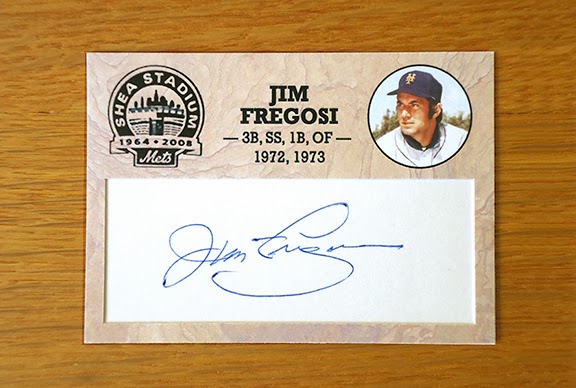 Jim Fregosi joined the New York Mets when he was traded from the California Angels in exchange for Francisco "Paquin" Estrada, Don Rose, Leroy Stanton and the great Nolan Ryan on December 10, 1971. A trade that would come back to haunt the Mets organization and overshadow anything that Fregosi could ever do in New York. The six-time All-Star was brought in to solve a continuing problem at third base. Ryan went on to throw seven career no-hitters and become a member of the Baseball Hall of Fame.

"You always hate to give up on an arm like Ryan's," said Mets manager Gil Hodges to the New York Times the day of the trade. "He could put things together overnight, but he hasn't done it for us and the Angels wanted him. I would not hesitate making a trade for somebody who might help us right now, and Fregosi is such a guy."

"Being traded didn't upset me too much." Jim told writer Milton Richman. "What teed me off was that they said I was old. I'm not old. I'm only 29, and I think I can play for quite a long time yet."

Fregosi made the switch to third base in spring training until suffering a broken right thumb. To make matters worse the new Met came to Florida obviously out of condition. "It wasn't just the extra weight he was carrying," Coach Eddie Yost told Jack Lang of The Sporting News. "It was all that stuff around his middle. He couldn't move and he couldn't bend over." Jim was able to make his New York Mets debut on Opening Day, April 15, 1972 at Shea Stadium. He would hit a double in his first at-bat to contribute to the 4-0 victory over the Pittsburgh Pirates. Unfortunately the rest of the season would not be as kind to Fregosi. He would finish with a .232 batting average, 5 home runs and 32 RBIs. Far short of expectations. "I was living the good life and I loved it," Jim recalled about the 1972 season. "But I was paying for it on the field."

A committed Fregosi came to the 1973 campaign 15 pounds lighter and ready to return to his former success. The jovial infielder also had not had a drink in four months, vowing to get out of the game if he could not bounce back from the two off years. His struggles on the diamond seemed to continue none the less. Despite a brief period when he replaced an injured Bud Harrelson at shortstop in early June he duplicated the production of the previous season. The Mets sold his contract to the Texas Rangers on July 11, 1973.

Jim continued his playing career until 1978. After that he enjoyed a very successful managerial stint that included leading the Philadelphia Phillies to the World Series in 1993. "I learned in my first managing job not to take myself so seriously," Fregosi offered. A well respected and enjoyed member of the Major League Baseball community serving in various functions with several teams. In 1988 the Anaheim Angels retired his uniform number 11, and elected him into the team's Hall of Fame the next year.

Jim Fregosi suffered a stroke in the Cayman Islands while on an MLB alumni cruise. He passed away surrounded by family and friends in Miami, Florida days later on February 14, 2014.

Jim signed his card in the set from an autograph request sent to his home on November 20, 2008.