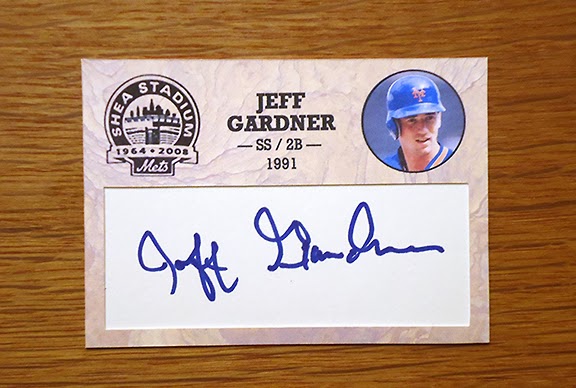 Jeff Gardner signed with the New York Mets as an amateur free agent on August 28, 1984. The infielder from California had been selected in that year's amateur draft by the Houston Astros, but elected not to sign at that time.

Gardner worked his way through the Mets minor league system. Impressing many coaches with his strong work ethic along the way. "You need to see him play for two weeks to appreciate him," observed Mike Cubbage, his Triple-A manager in Norfolk. "He's sure-handed, and he turns the double play as well as anyone in the major leagues. He does the little things with the bat–bunts and moves guys over–that helps the team." Jeff was in an unenviable scenario as a middle infielder with an organization full of talent at those positions. "I'm not saying there's no chance of getting to the big leagues, but as far as me being their second baseman of the future, I'm sure they don't see that," Gardner told The Los Angeles Times in 1989. "But that can change."

Jeff continued to play at the Triple-A level and work as a waiter at a San Luis Obispo restaurant during the winter. Believing that continuing to work towards a major league contract would be the best way to benefit his young family. "As long as I still have some chance to make the big leagues, I'll stay," Gardner explained. "If you don't have a chance, I think they'll let you know."

His work paid off when he was promoted to New York as rosters expanded to end the 1991 season. Jeff would make his long awaited major league debut at Shea Stadium on September 10th. Gardner was the starting shortstop during a one-hit gem tossed by fellow rookie, Pete Schourek. Jeff contributed his first big league hit and two runs scored to the 9-0 victory over the Montreal Expos. "I have quite a few memories," Jeff shared in 2014. "I recall driving to the stadium, seeing my uniform and then just walking out on that field for the first time as the most vivid snapshots."

Gardner would appear in 13 games to close the season with six hits in 37 at-bats for a .162 batting average. The Mets traded Jeff to the San Diego Padres in exchange for Steve Rosenberg on December 11, 1991. He would enjoy his best major league season with the Padres in 1993. "I wasn't ready to be in the big leagues no matter how many guys were ahead of me," Gardner offered. "Until after I left the Mets."

Jeff entered the business world after leaving professional baseball in 2005. He gained success in a variety of real estate related occupations. Once his children were through their college years, he returned to the game as a Major League advance scout for the Arizona Diamondbacks in 2014.

He signed his card in the set from an autograph request sent to his office on October 9, 2013.
Posted by LEE HARMON at 10:54 PM