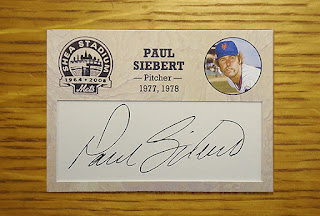 Paul Siebert became a member of the New York Mets during the infamous "Midnight Massacre" on June 15, 1977. He was traded along with Bobby Valentine from the San Diego Padres in exchange for Dave Kingman. The deal was one of three made that Wednesday evening to reshape the roster. The most notable move saw future Hall of Famer, Tom Seaver heading to the Cincinnati Reds.

Siebert was a left-handed reliever whose family has deep baseball roots. His father was former major league All-Star first baseman Dick Siebert. The elder Siebert gained even greater acclaim as the head baseball coach at the University of Minnesota where he guided the school to three NCAA titles (1956, 1960, 1964) and 12 Big Ten Championships. The university renamed their baseball stadium "Siebert Field" after him on April 21, 1979.

Dick's contribution to Minnesota baseball did not stop at the collegiate level. He conducted a series of clinics throughout the state teaching his "gospel of baseball" to area youth. Among those benefiting from his instruction over the years were both his own sons. Paul's older brother, Dick Siebert Jr. became a prominent neurosurgeon instead of pursuing a baseball career. Paul was a highly recruited high school pitcher who planned on attending Arizona State University. He was drafted by the Houston Astros out of Edina High School in the third round of the 1971 amateur draft.

Paul made his New York Mets debut on July 7, 1977 facing the Philadelphia Phillies at Veterans Stadium. His second appearance with his new team would be his Shea Stadium debut on July 9th. Siebert threw the final two scoreless innings of the 7-5 victory over the Montreal Expos and was credited with the win. Siebert would split the season between New York and Triple-A Tidewater appearing in 25 games for the Mets with a 2-1 record and 3.86 ERA.

He made the opening day Mets roster for the 1978 season, and pitched in games through July before again spending time in Tidewater. Paul returned in September to finish the season in New York. In his 27 major league appearances for 1978 he posted a 0-2 record, one save and a 5.15 ERA.

The southpaw's career with the Mets ended when he was traded to the St. Louis Cardinals in exchange for Bob Coluccio on October 2, 1978. Siebert was released by the Cardinals at the end of spring training camp. He pitched for the Triple-A Denver Bears before retiring from baseball after the 1979 season.

Paul Siebert signed his card in the set from an autograph request sent to his home on November 16, 2013.
Posted by LEE HARMON at 9:25 AM