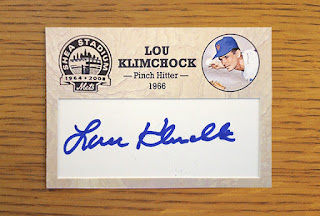 Lou Klimchock was sent from the Milwaukee Braves organization to the New York Mets on September 25, 1965. The veteran came along with Ernie Bowman as the players to be named later as compensation for Billy Cowan who had been given to the Braves earlier on August 5th. Lou had finished the season with then Triple-A Atlanta and was grateful for a new opportunity with the Mets. "It was a stone wall whichever way I turned with that club," he told the Milwaukee Journal. "They just don't need enough help. This club does and there are jobs around here. I haven't got one yet, but I've got a good shot at least."

The veteran utility infielder had made his major league debut with the Kansas City Athletics in 1958. In his second game the 18-year-old achieved his first big league hit. A home run on the final day of the season.

Klimchock, who had now played parts of seven season in the majors, earned a spot on the Mets 1966 opening day roster by delivering a couple of key home runs and four hits in his last four spring training games. "I'd like to have him on the bench for his power as a pinch-hitter," Mets manager Wes Westrum said of his decision.

Lou appeared in his first game as a New York Met on April 17, 1966 at Shea Stadium. The left-handed batter struck out pinch-hitting for Tug McGraw in the 7th inning of the 5-4 victory over the Atlanta Braves. Klimchock would appear in four more games as a pinch-hitter through May 3rd. Failing to get a hit in any of those opportunities. "I've never done much as a pinch-hitter." Lou explained.

The Mets optioned Klimchock to Triple-A Jacksonville where he finished the 1966 season. New York traded Lou along with Ernie Bowman to the Cleveland Indians in exchange for pitcher Floyd Weaver on October 12, 1966

After his active playing career, Klimchock became the manager of the Indians' Class-A team in Reno, Nevada from 1972-1973. Returning home to Denver, Colorado after that to begin a 12-year career with the Coors Brewing Company. After which he and his family would move to Phoenix, Arizona to pursue a position with the Coca-Cola Bottling Company from which he retired in 1990.

Lou was named to the board of directors of the newly formed Major League Alumni Association in 1989. He continued to work for the association as the President of the Arizona Major League Alumni for more than 25 years. An organization that helps children throughout Arizona and those in the baseball family that have fallen on hard times. "It's my pleasure to work with Alumni members as well as individual and corporate sponsors for the common goal of enhancing lives through baseball related activities." Klimchock offered.

Lou Klimchock signed his card in the set from an autograph request sent to his home on November 17, 2015.
Posted by LEE HARMON at 11:05 PM