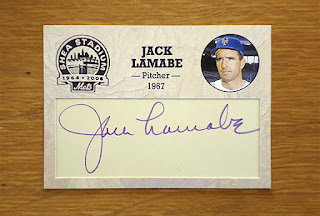 Jack Lamabe came to the New York Mets when his contract was purchased from the Chicago White Sox on April 26, 1967. The veteran pitcher had begun his major league career with the Pittsburgh Pirates in 1962. Then moved to the Boston Red Sox and Houston Astros before coming to Chicago. Jack was a high school teammate of future Miracle Met, Al Weis. The two played together for the White Sox prior to Lamabe joining the Mets.

Jack made his debut with the club on April 28th facing the Cincinnati Reds at Crosley Field. The right-handed reliever threw a scoreless 9th inning of the 7-1 loss. His first game as a Met in Shea Stadium came on May 4th against the San Francisco Giants. Once again being sent out to pitch the 9th inning of a game the Mets trailed. Lamabe would yield a home run to Jim Hart on the first pitch he delivered but recovered to retire the next three batters in what ended a 3-1 loss.

The Mets called on Jack to take a spot start on May 28th in the second game of a doubleheader with the Atlanta Braves at Shea. It was a short outing with Lamabe being removed in the second inning after allowing two runs on a pair of doubles. New York would lose 7-3. His only other start was facing the St. Louis Cardinals on July 2nd. He fared better hurling seven innings against the National League leaders, but gave up three runs that led to a 3-1 defeat.

After 16 games with a 0-3 record and 3.98 ERA the Mets decided to send Lamabe to the minors. He was claimed off waivers by the Cardinals and joined them on July 16th. Jack suited up for his new team to face the Mets in St. Louis later that same day. His former teammates were not kind to him. They would strike for seven hits and score five runs in just two official innings of work. Resulting in a 8-5 New York victory. Lamabe would certainly appreciate the move to the Cardinals as they went on to become the 1967 World Series Champions. While the Mets finished in last place in the National League with a 61-101 record.

St. Louis sent pitcher Al Jackson to the Mets as compensation for Lamabe in October of 1967.

Jack retired from pitching after the 1969 season and went to work as the pitching coach for the Montreal Expos. He also served as an assistant football and basketball coach at Springfield College throughout the 1960s. Lamabe left major league baseball and became the head baseball coach at Jacksonville University from 1973-1978. The next year Jack became the first full-time baseball coach in Louisiana State University history, and remained there for five seasons. Leaving the school to become a minor league pitching coordinator for the San Diego Padres and later Colorado Rockies.

He was inducted into the Vermont Athletic Hall of Fame in 1980.

Lamabe passed away at his home in Baton Rouge, Louisiana on December 21, 2007.

I created Jack Lamabe's card in the set from an autographed index card in my collection.
Posted by LEE HARMON at 10:01 PM