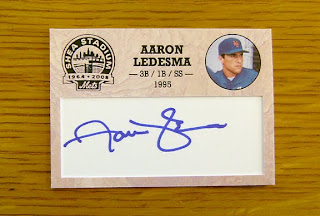 Aaron Ledesma was selected by the New York Mets in the second round of the free agent draft on June 4, 1990. "Do you remember the scene from Titanic when DiCaprio screams "I'm King of the world"? That's how it felt to me," Aaron remembered to Patrick Kennedy in 2006. "I remember driving in my car and screaming something similar."

The highly regarded prospect made his major league debut for the Mets at Shea Stadium on July 2, 1995. He entered the game as a pinch-hitter and stroked a single off Cincinnati Reds starting pitcher John Smiley. Thus recording a hit in his first MLB at-bat. Ledesma appeared in 21 games for the Mets during the 1995 season. Recording a .242 batting average in 39 plate appearances. He was traded to the California Angels in return for Kevin Flora on January 18, 1996.

"Bobby Bonilla and Doc Gooden were both very nice to me. I remember feeling like a little kid the first time I met them," said Ledesma. "But all of those guys were great. It's too bad that I was so self-absorbed at the time. I could've learned a lot more from them than I did. I wish I had another chance to get to know them on a deeper level."

Ledesma played parts of four more seasons in the major leagues until 2000. He finished his playing career with the Long Island Ducks of the Atlantic League in 2002. After that Aaron joined the New York Yankees organization as a minor league hititng coach. Reaching the position of manager of their Double-A Charleston Riverdogs in 2011.

The former infielder found a new passion at the end of his playing career in 2003. "Nobody trains you for life after baseball," explains Ledesma. The training that he discovered for himself was Bikram style Yoga. He became certified as an instructor in 2005 and along with his wife, Karen opened their studio, Yoga 365 in Clearwater, Florida during 2012. Aaron brought those skills back to the game of baseball when he developed and implemented a yoga sequence for the New York Yankees Minor League system in January 2014.

Aaron Ledesma signed his card from the set for me following the Scranton Wilkes-Barre Yankees game in Indianapolis on May 4, 2009.
Posted by LEE HARMON at 8:44 PM