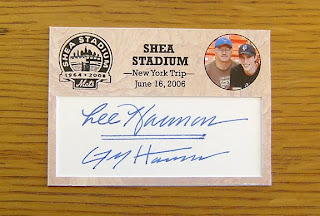 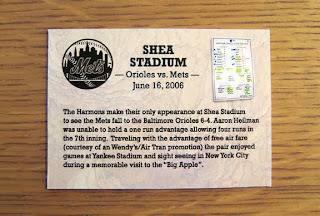 One of the greatest parts of this Shea Stadium set has been creating the cards themselves. Selecting the photos used for the players and writing the accounts have both been a real pleasure to do. I enjoy the Mets history and with the fact that the players total 791 I just knew that there had to be nine additional ones to make it an even 800. The easiest to decide was the first to be featured here.
I have been a Mets fan since I was 12 years old. For years I had followed the team playing at Shea Stadium on television and by listening to radio broadcasts. So I was familiar with the planes flying overhead, the ramps to the park from the train, and had formed a pretty clear mental picture. However I had never personally been to the place of all these memories. Sure I had seen our club play in Cincinnati, Chicago, and even Florida for spring training, but not in our Shea. For many years my younger son, Greg and I would talk of taking a trip to see the parks in New York (he being a big Yankees fan). However our living in Indiana kept that from happening. The cost of air fare seemed to always become the stumbling block.
The summer of 2006 offered a unique opportunity for us. Wendy's restaurant teamed up for a promotion offering free air fare anywhere inside the continental United States on Air Tran Airlines. The only catch was collecting 64 flight coupons off their cups. Within days an inspired Greg had gathered the 128 that we needed to fly the two of us for free. We sent them in and began to check the season schedule with a purpose. We selected June 16, 2006. The Yankees were hosting Cleveland the day before and we could see both stadiums before they would be replaced with new ones.
The Mets played the Baltimore Orioles in an Inter-league contest. (Trust me I remembered that it was the Orioles that we defeated in the miracle 1969 season.) Alay Soler was the starting pitcher for a lineup that included Jose Reyes, Carlos Beltran, Carlos Delgado, Lastings Milledge, and our favorite, David Wright. Unfortunately Aaron Heilman (a fellow Hoosier) was unable to hold a one run Mets advantage allowing four runs in the seventh inning as we fell to the Orioles 6-4.
It would prove to be the only appearance of the Harmons at Shea Stadium. Greg and I signed our card in the set in October of 2008. Making it without question my absolute favorite in the set.
Posted by LEE HARMON at 3:14 PM