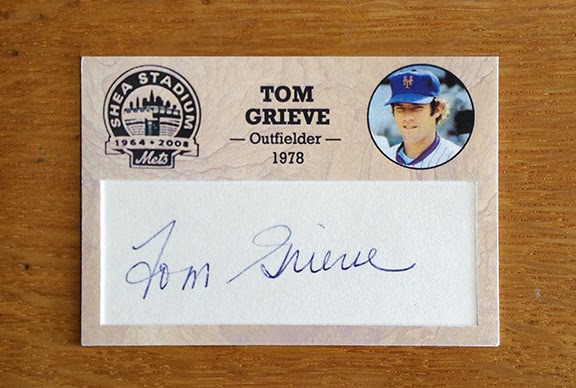 Tom Grieve came to the New York Mets in a rare four team trade on December 8, 1977. The Texas Rangers sent Grieve and a player to be named later to the Mets. The Atlanta Braves shipped Willie Montanez to the Mets. Texas then sent Tommy Boggs, Adrian Devine and Eddie Milner to the Braves and Bert Blyleven to the Pittsburgh Pirates. The Pirates sent Nelson Norman and Al Oliver to the Rangers. The Mets moved John Milner to the Pirates and Jon Matlack to the Rangers. Texas would send Ken Henderson as the player to be named later to New York on March 15, 1978 to eventually complete the complicated transaction.

Grieve was an accomplished veteran outfielder who had hit 20 home runs during the 1976 season with the Rangers. Two years later, during his lone season with the Mets he would only start 21 games for New York. Tom's debut with the team came on April 9, 1978 at Shea Stadium. He grounded out as a pinch-hitter in the eighth-inning of a 5-0 loss to the Montreal Expos. Grieve's first home run with the club came on April 14th when the team visited Montreal. His ninth inning blast tied the game that was later won by the Mets 3-2 in 10 innings. "Naturally I want to be a starting player." Grieve said after the game. "I will stay in the best of shape and show them I can play regularly."

Tom was not able to establish himself as an everyday part of the lineup as he had hoped. He finished the 1978 season with 54 appearances, two home runs, 8 RBIs, and a .208 batting average. It was a year that also saw the Mets flounder to a miserable 66-96 record. The last victory led by Grieve in a guest manager role. Mets manager Joe Torre had a tradition of selecting a veteran from the current roster to take over managerial duties on the final game of each season. "He said you can do anything you want except change pitchers," Tom recalled to MLB.com in 2011. "I said, 'Can I put on the suicide squeeze?' He said, 'Sure". Grieve got the chance in the fifth inning. The Mets led 1-0 and had one out, a runner on third and pitcher Kevin Kobel at the plate. Tom called for the squeeze. "He fouled off the pitch," Grieve said. Kobel then grounded out, but the runner later scored on a hit and the Mets won the game 5-3 over the Chicago Cubs at Wrigley Field. With his managerial experience Grieve became part of a special tradition that Torre kept up all the way through his 29-year coaching career. "That was a great thing that he let players do," said Grieve. "I'll never forget it."

Grieve was traded along with minor league pitcher, Kim Seaman to the St. Louis Cardinals in exchange for Pete Falcone on December 5, 1978. He played one year with the Cardinals and retired as a player after the 1979 season. Tom became the General Manager and later broadcaster for the Texas Rangers. He was inducted into the Ranger's Hall of Fame on July 24, 2010.

Tom Grieve signed his card in the set from an autograph request sent to his home on January 31, 2009.
Posted by LEE HARMON at 6:48 AM