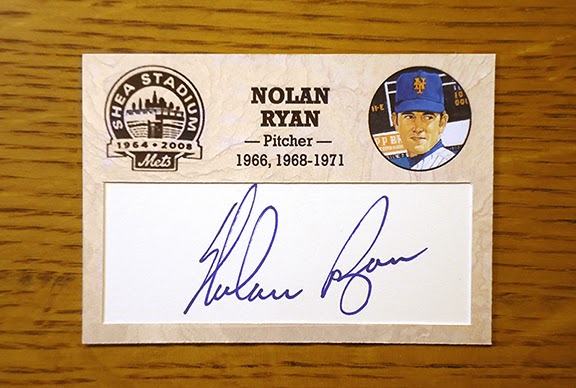 Nolan Ryan was selected by the New York Mets organization in the 12th round of the free agent draft on June 8, 1965 out of Alvin High School in Texas. The 18-year-old right handed pitcher was sent to rookie level ball at Marion of the Appalachian League. Nolan advanced quickly during the very next year. He began 1966 in Single-A Greenville, where he posted a 17-2 record before being promoted to Double-A Williamsport and finally the major leagues as a September call-up.

The "Ryan Express" made his big league debut as a member of the New York Mets on September 11, 1966. The Shea Stadium faithful saw the Mets lose to the Atlanta Braves by a score of 8-3. The 19-year-old future legend threw two innings of relief. Nolan struck out the first batter he faced, but in his second inning of work surrendered a solo home run to Joe Torre. A week later, Ryan was given his first starting assignment but lasted a single inning. Nolan surrendered four runs on four hits while striking out three Houston Astros batters at the Astrodome in his home state of Texas. Nolan was returned to the minor league system following those two appearances.

He would leave the minor leagues for good at the start of the 1968 campaign. Ryan's first game back at the big league level was a return to the Astrodome on April 14th. This time Nolan would show signs of the pitcher he was to become by hurling 6-2/3 innings of shutout baseball while striking out eight, and earning his first ever major league victory with a 4-0 win over Houston. He started a total of 18 games during his 25 appearances in 1968. His first full season ended with a 6-9 record, and fine 3.09 ERA. Most importantly the power pitcher struck out 133 batters in 134 innings of work.

Nolan was used as a spot starter and long reliever during the magical 1969 season. His efforts helped the "Miracle Mets" win the franchise's first World Championship. There was no question that the right hander had a tremendous fast ball. Often the question was could he keep it in the strike zone. Mets manager, Gil Hodges brought Ryan into a key moment of Game Three of the National League Championship Series. Trailing in the game with two runners on base, Mets starting pitcher Gary Gentry had fallen behind 1-2 in the count. Desperately needing a strike three, Hodges bypassed a more reliable Tug McGraw and summoned Nolan from the bullpen. "Keep it down," the manager instructed as he handed Nolan the ball. "Just keep it down." A packed Shea Stadium crowd alongside the rest of the national television audience saw the young Texan fire in strike three on his first pitch. The Mets manager called for an intentional walk to the next Atlanta batter, future Hall of Famer Orlando Cepeda to load the bases. Now a lapse in control would force home another run with any additional walk. Ryan struck out Clete Boyer and ended the inning with a fly ball to left field off the bat of the next batter. New York had come out unscathed and Nolan would finish the game and be credited with the win as the Mets rallied back to a 7-4 victory. It was the first post-season win at Shea Stadium and sent the club to the World Series. "We were elated, absolutely overjoyed," remembered Jerry Koosman. "We were so happy and proud of Nollie. We just couldn't believe it."

Ryan came out of the bullpen for Game Three of the World Series to record the save by closing out the 5-0 victory over the Baltimore Orioles at Shea Stadium. "Looking back on it." Ryan reflected to the Daily News in 2009. "It was my one shot at a World Series team. When it happened, probably a lot of us, thought that we'd be in that position again. It was our inexperience to not realize how hard and unique it is to get to that position. Now, there's such an appreciation."

Nolan would pitch two more years for the Mets before being sent to the California Angels in what would become one of the all-time worst trades in baseball history. New York traded Ryan along with three prospects in exchange for third baseman Jim Fregosi. "As for Ryan, I really can't say I quit on him." offered Mets general manager Bob Scheffing in December 1971. "But we've had him three full years and, although he's one hell of a prospect, he hasn't done it for us. How long can you wait? I can't rate him in the same category with Tom Seaver, Jerry Koosman or Gary Gentry."

Nolan Ryan and his 100 mph fastball would go on to throw a major league record seven no-hitters, strike out 5,714 batters, while earning a total of 324 victories over a 27 season career. He was enshrined in the National Baseball Hall of Fame in 1999.

Nolan Ryan signed his card in the set through an autograph request sent to the Nolan Ryan Foundation on August 13, 2014.
Posted by LEE HARMON at 10:27 AM