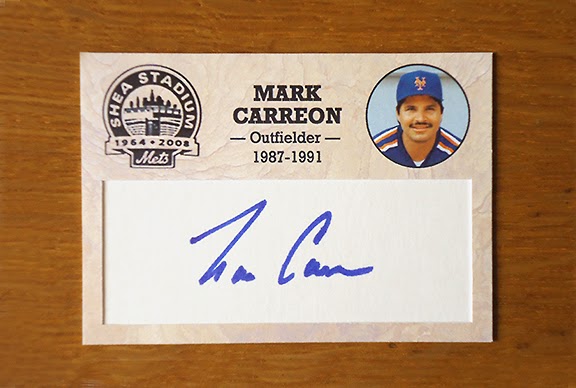 Mark Carreon was selected by the New York Mets in the eighth round of the free agent draft on June 8, 1981. The Tucson, Arizona native is part of a baseball family. His brother Michael played on the 1973 Cactus Little League team that represented the United States in the Little League World Series. His father was Camilo Carreon, a former major league player for 8 seasons with the Chicago White Sox, Clevelend Indians and Baltimore Orioles.

The 17-year-old outfielder made his professional debut with the Rookie Level Kingsport club playing 64 games in 1981. He had worked his way up to the Triple-A Tidewater Tides by the close of the 1985 season. Carreon hit 10 home runs, with 89 RBIs and a .312 batting average during a fine year with the Tides in 1987. The effort earned him a September call-up to the major leagues.

Carreon made his big league, and New York Mets debut on September 8, 1987 as a pinch-hitter at Shea Stadium. A bitter sweet moment for the rookie who had dealt with the passing of his father only six days earlier. Mark would appear in a total of nine games that year, but return back to Norfolk to begin the next season. He received another September call-up in 1988 and entered seven games for the National League East Champions.

Mark became a permanent major leaguer during the 1989 campaign. On May 12th, the Mets began to use him as their right handed pinch-hitter off the bench and he rewarded their confidence by setting the then club record of four pinch-hit home runs that season. He was also an option in the outfield and finished with an overall total of 6 home runs, 16 RBIs with a .308 batting average over 133 at-bats.

At the beginning of the 1990 season, Mark was able to switch from his assigned uniform number 32 to the same number 45 his late father had worn. He was enjoying a breakthrough season hitting 10 home runs with 26 RBIs in only 188 plate appearances when an unfortunate injury occurred. Carreon tore the ligament in his right knee while rounding third base in San Diego on August 21st. "People say you hear the ligament go," Mark recalled to the New York Times. "I didn't hear anything. I just wound up on the ground. I couldn't move an inch." During his rehabilitation time Carreon checked himself into New York's Smithers Center for Alcoholism and Drug Treatment. "I checked into the program because I wanted to educate myself, to learn more about this problem before it got any worse." Mark explained to the Tuscon Star at that time.

He worked hard over the winter and reported to spring training to compete for a spot in the outfield. "When I reported, I was called a cripple," said Carreon. "But I've made great strides since I've been here." A good spring earned him a roster spot, but the free agent signing of Vince Coleman forced Mark back into the bench role he had shaken during the previous year. "It's a tough pill to swallow," the outfielder remarked about playing time in April. "But it's beyond my control." On May 4th he hit his eighth career pinch-hit home run to establish the Mets club record. "It's unfortunate that my career is at a standstill when I'm 27 years-old and at the peak of my abilities," Carreon told reporters after the game. "There is no doubt that I want to play and no doubt I would do about anything so that I can play." Mark's attitude deteriorated throughout the rest of the season. It was reported that twice during 1991 he violated club policy by leaving the dugout and departing the stadium before the end of the game. The Mets eventually honored his requests and traded him along with pitcher Tony Castillo to the Detroit Tigers in exchange for Paul Gibson on January 22, 1992. "I'm not going to cut any throats," Carreon said following the trade."New York is definitely the place to play, but you have to be playing. I've always had full confidence in my ability. I just couldn't show it in New York."

Mark played another five years in major league baseball and two more in Japan before retiring in 1999. After baseball he was part of a shipping company in McComb, Mississippi. Carreon was among the players named in the 2007 Mitchell Report as a known user of performance enhancing substances during his time with the San Francisco Giants. "Regarding the Mitchell Report, the following is true-towards the end of my 18-year career, regretfully on one occasion I experimented with a performance-enhancing sustance, however the remaining 17 years were unscathed by this one error in judgement." Carreon explained in a written statement. "Meanwhile here in the present, I support the challenge that lay before the Players Association, current players and owners in restoring the great game of baseball."

Mark Carreon signed his card in the set through a private signing held by Nick Cicogna on August 5, 2014.
Posted by LEE HARMON at 2:43 PM