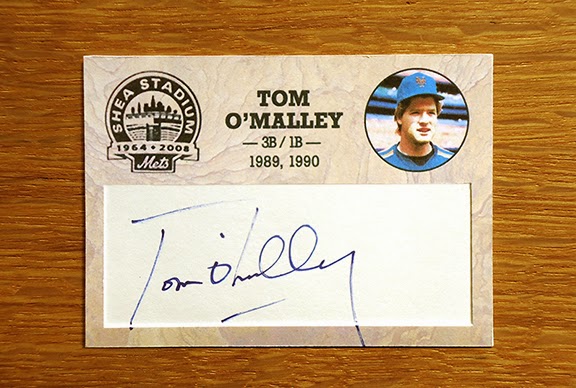 Tom O'Malley joined the New York Mets organization when he was traded from the Montreal Expos along with Mark Bailey in exchange for Steve Frey on March 28, 1989. O'Malley was a former major league veteran who had been working to return to the major leagues the last few seasons. "I know I can play in the big leagues," The Triple-A Tidewater Tides third baseman said in an interview in May 1989. "It's tough not to have the chance. About the only thing you can do down here is to try to keep from pulling an attitude muscle." O'Malley was looking at a tall order to make the New York team with Howard Johnson as the Mets starting third baseman. "I am just down here trying to put up some good numbers again. I hope they notice."

O'Malley was promoted to the Mets when rosters expanded, and made his debut with the club at Shea Stadium on September 7, 1989. Tom came in as a pinch-hitter during the 13-1 victory over the St. Louis Cardinals. He would appear in a total of nine games for the team that finished in second place of the National League Eastern Division. O'Malley did deliver six hits in 11 at-bats for a .545 batting average over that handful of games.

The left handed hitter made the big league club out of spring training to be used as a pinch hitter and reserve corner infielder. O'Malley was struggling with just two hits during his first 22 at-bats when what is possibly his greatest Mets moment came on June 5, 1990. He entered the 5-5 tie game against the Montreal Expos at Shea in the 10th inning. His first at-bat that day came in the bottom of the 11th inning. "My birthday is June 6th," remembered Mets manager Buddy Harrelson. "Tom had been struggling for us as a pinch-hitter, and I said that I would give all my presents back the next day if Tom O'Malley would just hit a home run." When the ball sailed over the head of David Martinez falling over the 410 foot marker of the centerfield fence, Tom had delivered the game winner. "It was a birthday wish that came true and I thought that was the catalyst that got us going in June." Harrelson concluded. "It was unexplainable," O'Malley said after the game. "It's something I didn't expect. People might not have been aware that I was on the team. Maybe this will be a start and people will recognize the Irish fellow."

Tom remained with the club as a part time player for the remainder of 1990. He appeared in a total of 82 games hitting three home runs, driving in 14 runs while posting a .223 batting average. At the end of the season the Mets sold his contract to the Hanshin Tigers of Japan's Central League.

O'Malley played six years in Japan for both the Tigers and later Yakult Swallows. He was both the regular season and Japan Series MVP while leading Yakult to win the Japanese Series in 1995. After retiring from playing in 1996, Tom managed the independent Newark Bears from 1998 to 2001.

The Montoursville native became the coach of the local Loyalsock High School softball team in 2013. "It's been a lot of fun so far. They've played hard. They've had great attitudes." Coach O'Malley described his start with the Lady Lancers. "And you know they're doing the little things and we worked on the fundamentals."

Tom returned to Japan in January 2014. He became the hitting coach for the Hanshin Tigers.

Tom O'Malley signed his card in the set for Jamie Blye at the Williamsport Crosscutters 8th Annual Hot Stove Banquet in Williamsport, PA on January 20, 2013.
Posted by LEE HARMON at 9:15 AM