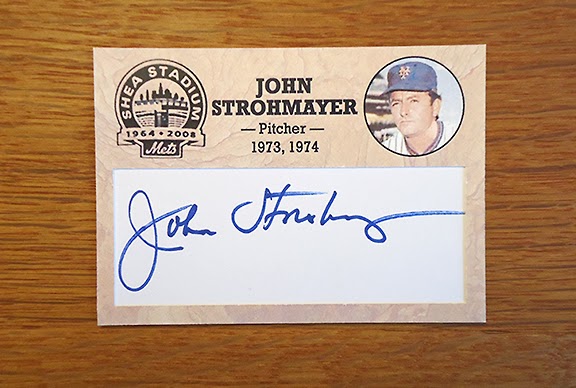 John Strohmayer came to the New York Mets when he was selected off waivers from the Montreal Expos on July 16, 1973. The right-hander had spent parts of four years in the major leagues with the Expos and was brought in to replace reliever Phil Hennigan. "We are both so happy," Mrs. Connie Strohmayer told the Montreal Gazette after the announcement. "He pitched so well against New York earlier this year and he had two good starts against them in '71. I guess they remember." John remembered one game in particular as his favorite ever at Shea Stadium, "Defeated Nolan Ryan and the Mets in a complete game 5-hitter in 1971. We won 2-1."

John made his debut with his new team that evening facing the Braves in Atlanta. He tossed a scoreless ninth inning during the Mets 8-6 loss. Strohmayer actually did not allow a run until a rough outing in St. Louis on July 26th. John would surrender six earned runs in two innings of relief including a grand slam home run to Cardinals pitching great, Bob Gibson. In total he only made seven appearances (two at Shea Stadium) before an arm surgery ended his season with the eventual 1973 National League Champions.

Strohmayer finished his injury rehabilitation and pitched with the Triple-A Tidewater Tides before earning a September call up the next year. His appearance on September 14, 1974 at Shea was his final one of his major league career. "I had arm surgery in 1973 and it never really came back," Strohmayer remembered. "I went to spring training in 1975 with the Cleveland Indians. Frank Robinson was the manager. I decided after not being able to put up with the pain that I needed to go back and begin what I started, so I embarked on a career in education."

John first became a teacher and coach at the Middle School level, and soon advanced to teaching mathematics to High School students. Strohmayer began his administrative career in 1992 when the Gateway Unified School District was formed in Northern California. He retired with 16 years of teaching and 17 more years of school administration on his resumé. "We turned 1930s and 1940s schools into really quality modern school sites," John explained. "It took a lot of money but there were a lot of real positives."

John and Connie Strohmayer enjoyed some good fortune in February of 2009. They joined 14 other Gateway employees in dividing up a $76 million California Super LOTTO Plus jackpot. "The most fantastic thing about this win is that we have really good people- all of them hard working educators- and now they get to realize their dreams," said Steve Gray, assistant principal at the Shasta Lake School.

John Strohmayer signed his card in the set from an autograph request sent to his home on September 20, 2011.