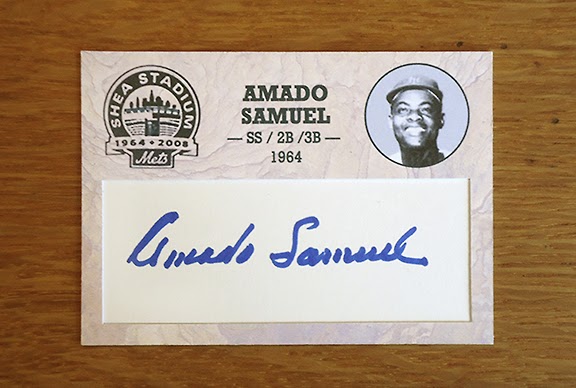 Amado Samuel joined the New York Mets when his contract and that of Adrian "Smokey" Garrett was purchased from the Milwaukee Braves on October 15, 1963. Samuel was a pioneer with the Braves when he became the first of a string of major league shortstops to come from San Pedro de Macoris of the Dominican Republic. "I am proud of being the majors' first Dominican shortstop," he told Sports Illustrated in 1987. "I guess there are a lot of them now. You know, one reason there might be so many is the ground they play on. You've got to have very good hands to play on those fields."

Samuel made his New York Mets debut as the starting shortstop in the first game ever played at Shea Stadium. He would give the club it's only lead of the day with a two-run double in the eventual 4-3 loss to the Pittsburgh Pirates. Amado started nine of the first 11 games, but saw his batting average at a lowly .127 by the end of May. The light-hitting infielder tried everything, including wearing glasses, to get his bat going. The Mets acquired Roy McMillan in a second transaction with the Braves on May 8, 1964. New York gave pitcher, Jay Hook and a player to be named later to Milwaukee. That player ended up being Adrian Garrett on June 17th. The addition of McMillan moved Amado to the Mets bench until an on-field injury sent Roy to the disabled list.

Amado took advantage of this second chance. He responded by hitting a torrid .303 over 23 straight starts at shortstop and third base. When McMillan returned Samuel was optioned to Triple-A Buffalo in a roster move. "I didn't play too long after the Mets 'cause I tore up my knee in Buffalo," Amado said. "Missed out on the big bucks, I guess but I'm healthy, doing fine, no complaints." He finished the 1964 season in New York, his last in the majors, with a .232 batting average, and 5 RBIs in 53 games.

He is often mistakenly thought to be related to fellow Mets player, Juan Samuel. "I don't even know him," explained Amado to clear up that confusion in an interview with SABR author, Malcolm Allen in 2006.

After retiring from baseball, Samuel continued to live in his adopted home of Louisville, Kentucky. Amado and his wife Aldetha, who he married in 1962 raised their family there. Samuel worked many years as a refrigerator repairman at the General Electric plant in Louisville. "Me, I haven't played in years," he offered in 1987. "I'll go to a game in Cincinnati once in a while—I said hello to Cesar Cedeño when he was with the Reds—but the Mets are still my team."

Amado Samuel signed his card in the set from an autograph request sent to his home on January 14, 2014.
Posted by LEE HARMON at 2:16 PM