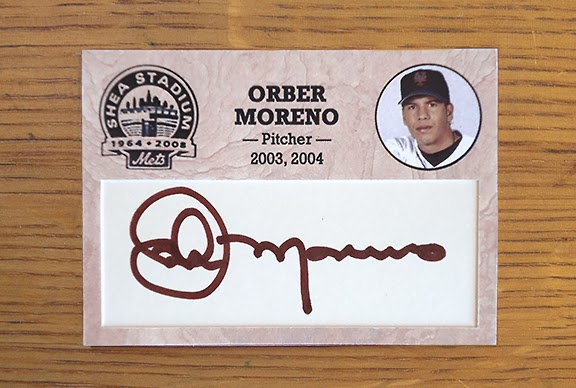 Orber Moreno was signed as a free agent by the New York Mets on March 6, 2003. His first name is a combination of his parents' names—Orlando and Libertad. The hard-throwing Venezuelan was originally signed as a 16-year-old prospect by the Kansas City Royals in 1993. A major arm and a second shoulder surgery brought the Royals to the decision of granting him his release.   The Mets pitching coach at Single-A St. Lucie, Rick Mahler had been Orber's Triple-A coach with Omaha. He encouraged his new team to grant Moreno a tryout. "Orber was a kid who came up fast," Mahler remembered. "I saw what he went through and how hard he worked to get back. It was very easy for me to recommend a guy like that."

Moreno described the scars of his surgeries in an interview with writer Lee Jenkins of The New York Times in April 2004 as Bengal stripes. "It's like I'm a tiger," Orber said.

The right-hander was recalled to New York following a strong season at Triple-A Norfolk, and made his Mets debut on September 3, 2003. Orber came in to pitch the ninth inning of a brilliant start from Steve Traschel facing the Atlanta Braves at Shea Stadium. Moreno would surrender two runs, but still be a part of the 9-3 victory, and grateful for a major league return. "I was excited," said Moreno. "I felt really good. A lot of things crossed through my mind, like the last time I pitched (with the Royals in 1999)."

He appeared in seven games to finish the 2003 season. The results were not as strong as with Norfolk, and resulted in a high 7.88 ERA. Still the Mets saw his promise and invited him to big league spring training camp the next year. Moreno rewarded their confidence with a strong preseason performance. Orber made the Opening Day roster and gave the Mets a fine season until a shoulder injury shut him down in late July. At that time he had posted a 3-1 record with 3.38 ERA in 33 appearances. That October another arthroscopic surgery was performed on his right shoulder and ended his time with the New York Mets. "My favorite moments were when I was done doing my job the fans always supported me!" was how Orber recalls his favorite personal memories at Shea Stadium.

Orber returned to pitch for the Venezuelan team in the 2009 World Baseball Classic. Between then he had endeared himself to his new hometown fans in Orlando, Florida. Moreno coached a 9-10 year-old Little League team and later developed the "Orber Moreno Baseball Clinic" there. Crowds of youngsters and parents would chnat "Or-ber! Or-ber!" while attending the WBC games. "You just never know how much you mean to them and how much they mean to you," a smiling Moreno said. "The answer is...Wow, I don't have words for it. The way they treat me is amazing."

Orber Moreno signed his card in the set from an autograph request that was sent to his home in September 26, 2009.