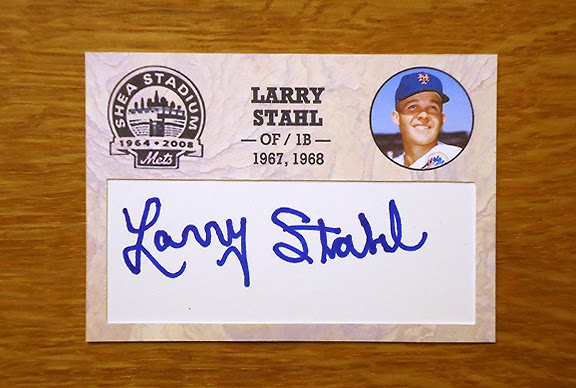 Larry Stahl joined the New York Mets when his contract was purchased from the Kansas City Athletics on October 17, 1966. "It was a good feeling going to the National League," Stahl remembered. He would make the team as a utility player to begin the next season. Larry made his Mets debut as a pinch hitter at Shea Stadium on April 13, 1967. His first hit would not come until April 27th at Wrigley Field during a 3-0 loss to the Chicago Cubs. The left handed hitter's struggles at the plate led to his demotion to Triple-A Jacksonville in early May. He returned in June, but ended the year with a .239 batting average, one home run and 18 RBIs in his 71 games.

Stahl began the 1968 campaign back in Triple-A. A hot start there saw him raise his batting average to a robust .366. The Mets recalled him to New York in July. Once there he played in 53 games and produced a .235 batting average with three home runs and 10 RBIs.

Larry became one of the "original" 1969 San Diego Padres when he was selected by that club from the Mets as the 13th pick in the expansion draft. Stahl became an everyday player there until joining the Cincinnati Reds in 1973. He was a bench player for the "Big Red Machine" club who lost to the Mets in the National League Championship series. It would be his last year in the major leagues.

Stahl's favorite memory of Shea Stadium was the Old Timer's Game that the Yankees played there in 1975. "I got the old Yankees autographs, including Joe Dimaggio," Larry said.

Larry is best remembered for breaking up a potential perfect game by the Chicago Cubs pitcher Milt Pappas on September 2, 1972. Stahl drew a walk with two outs in the ninth inning. An out by the following batter preserved the no-hitter, but it was the first time perfection had been thwarted in that manner. Pappas argued the pitch he threw was too close to call ball four. "The pitch was outside," Umpire Bruce Froemming defended years later to The New York Times in 2010. "I didn't miss the pitch. Pappas missed the pitch. You can look at the tape."

After baseball he remained in his hometown of Belleville, Illinois where he enjoys spending time fishing and hunting.

Larry Stahl signed his card in the set from an autograph request sent to his home on January 7, 2014.
Posted by LEE HARMON at 1:41 AM